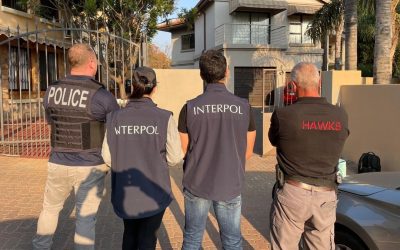 Two suspects of foreign nationality have been arrested by Interpol and the directorate for priority crime investigation (Hawks) in South Africa.

Announcing the arrest in a statement, Katlego Mogale, Hawks spokesperson, said the suspects, aged 39 and 42, were arrested on Wednesday in a joint operation led by Interpol assisted by Hawks’ 419 provincial task team.

Although their nationalities were not stated, Mogale said the suspects are alleged to be part of a cult known as the “air lords”, who are rivals of the Black Axe movement.

The Air Lords are said to be a secret cult of Nigerian origin, while Black Axe is a cult group that has developed a reputation in Nigeria over the years, with criminal activities like cybercrime and human trafficking tied to it.

Mogale said items recovered during a raid included laptops, phones, thousands of rands in cash, as well as an unlicensed firearm.

“This arrest is but one of several simultaneous happening currently in other countries tracing the suspects involved in online scams such as romance, investments, Bitcoin, employment and all related Advance Fee fraud,” the statement reads.

“The suspects will appear in court soon on charges of conspiracy to wire fraud, access device fraud, conspiracy to commit fraud and money laundering schemes as it relates to Contravention of Prevention of Organised Crime Act with the one suspect will be charged with possession of unlicensed firearm and ammunition.”

Meanwhile, Interpol, in a tweet, said the suspects are “wanted for online scams that extracted $1.8 million from victims”.  (The Cable)

As president, I’d dialogue with agitators…. But not bandits – Peter Obi

‘We stand with democracy’ — Nigeria reacts as Sao Tome and Principe…

FX crisis: Ghana to use gold instead of US dollars to buy oil