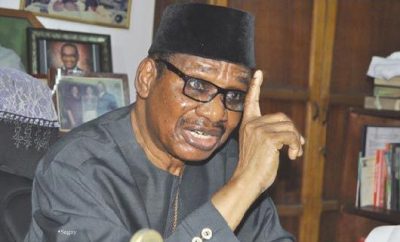 Prof. Itse Sagay (SAN), Chair­man of the Presidential Advi­sory Committee Against Cor­ruption (PACAC), has thrown his weight behind the resolu­tion of Southern Governors’ Forum that the next president of Nigeria must come from the Southern part of the country in the interest of justice, equity and fair play.

Speaking exclusively with Daily Independent on Tuesday, the legal luminary said ceding the presidency to the North in 2023 is dangerous for the unity of the country.

Southern governors from the ruling All Progressives Con­gress (APC), All Progressives Grand Alliance (APGA), and the Peoples Democratic Party (PDP) at their meeting in Lagos in July had issued a communi­qué where they agreed that the presidency should be zoned to Southern Nigeria in 2023 when President Muhammadu Bu­hari completes his second term.

“The forum reaffirms its commitment to the unity of Nigeria on the pillars of equity, fairness, justice, progress and peaceful coexistence between and amongst its people.

The forum reiterates its commitment to the politics of equity, fairness and unan­imously agreed that the pres­idency of Nigeria be rotated between Southern and North­ern Nigeria and resolved that the next president of Nigeria should emerge from the South.”

The governors, who again met in Enugu last week, also reiterated their commitment towards ensuring that the ma­jor political parties complied with their resolution on zoning of the presidential ticket to the South.

Ondo State governor, Rotimi Akeredolu, who is the Chair­man of the Southern Gover­nors’ Forum, said any political party that fields a Northern candidate for presidency in 2023 risks losing the support of Southerners.

He argued that when Pres­ident Buhari, a Northerner, completes his second term in 2023, the next president should come from the South.

According to him, “There are about three political parties that are in the Southern Gover­nors’ Forum, we have the All Progressives Grand Alliance, Peoples Democratic Party and the All Progressives Congress. All of us are unanimous in our position that the next president of this country must come from the South.

” For us, we are unanimous. It (the forum) is not a political platform. I believe that any par­ty that picks somebody from the North would have to face the whole Southern region because they will not support it”.

While declaring total sup­port for the Southern gov­ernors, Sagay said Nigeria is made up of two countries (North and South) amalgamat­ed in 1914.

According to him, one part of the country cannot be ruling while treating the other part as inconsequential.

” I have been saying it in the last two years that the next pres­ident should be from the South­ern part of the country. I agree with the Southern governors absolutely. We have to commit to fairness and inclusivity if this country is to remain as one. We are so diverse. It is a country where two large parts are amal­gamated. They were not the same country before and that is still clear. So, the two sides must be involved in the governance of Nigeria.

“That issue of presidency must be conceded to the South now and then later to the North. The North is enjoying the peri­od of presidency which will end in eight years, after that, I think it will be very reckless for any­body who insists that the North should continue to have it.

“It is like behaving as if the other part of the country is irrelevant and can be ignored, insulted and not considered in the issue of governance. That to me is dangerous. We should just agree that the next presi­dent should be from the South”.

Speaking further, Sagay also described the Director of Publicity and Advocacy of the Northern Elders’ Forum (NEF), Dr. Hakeem Baba-Ahmed as a Northern irredentist who should be ignored by every right thinking Nigerian.

Baba-Ahmed, while deliv­ering a keynote address at the maiden Maitama Sule Leader­ship Lecture Series organised by the student wing of Coali­tion of Northern Groups (CNG) at the Ahmadu Bello University (ABU), Zaria, at the weekend had said heaven will not fall if a Northerner is elected the next Nigerian president.

Maintaining that Northern­ers are not second-class citizens, he said the North will not ac­cept to serve as a second fiddle in 2023, when the region has the population to go to clinch the first position.

Sagay said Baba-Ahmed is angry with the resolution of the Southern governors that they will not support any political party that fields a Northerner in the 2023 presidential election.

He said, “Hakeem Ba­ba-Ahmed has been speaking in tongues for the last two years, everybody is always wonder­ing, where is this man going? I think he was so angered by the resolution of the Southern governors that he now came clear in the open and spilled the beans that he has been hiding in his heart all along.

“He is a Northern irreden­tist and he has exposed himself. From now, nobody will take him seriously again because he is a lost case. He should just be ignored”.