2023 elections: The odds for Tinubu-Shettima ticket 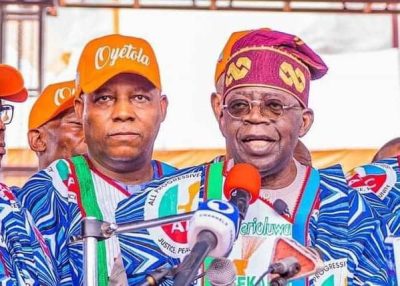 Given the objective reality on the ground today, no analyst can be accused of bias if he or she says that the odds undoubtedly favour Bola Ahmed Tinubu. What are the evidences on the ground to warrant this assertion? Of the three men, it is only Tinubu who has his immediate geo-political zone (the South-West states of Lagos, Ogun, Ondo, Osun, Ekiti and Oyo) firmly in his grip. As any knowledgeable commentator on Nigerian politics can readily agree, the recent loss by the APC of the governorship election in Osun State to the PDP does not in any way vitiate my assertion of Tinubu’s near absolute control of the South West. The governorship was an internal affair in which local political intrigues and calculations played a major role. It was not a plebiscite on Tinubu. In a nationwide election in which Tinubu will face other Nigerians, no South West man or woman will vote for another candidate other than Tinubu.

On the issue of control of ‘personal’ geo-political zone, Atiku fares particularly disastrously when compared to Tinubu. In spite of Atiku’s long years in politics in general and presidential political contest in particular, he has not been able to carve the North East (Adamawa, Taraba, Borno, Yobe, Bauchi, and Gombe) where he comes from, as a zone solidly in his firm political grips. There is no single state of the North East you can bank on that is exclusively Atiku’s if he is in a presidential contest against any other candidate whether the candidate is northern or southern. Not even Adamawa his home state nor Taraba his most neighbourly state!

How does Obi of the Labour Party fare in this particular criterion? Obi does not do any better than Atiku in this regard and is not in any way near to Bola Tinubu at all. Is spite of the waves I and many other observers acknowledge he is making on the Social Media, one cannot be sure that the South-East is his firm zone. The test for that is going to come in 2023 and given the prospects on the ground, the South East is going to be evenly divided between the Labour Party and the PDP with the APC even having a big chunk of the share. Many bigwigs of the PDP and the APC who have a foothold in the South East region have been openly saying that they and their parties have something to fight for in the region and they will not just let that go because an Obi is from their territory.

Let us leave the political zone of origins of the leading candidates and consider the immediate contiguous zone to their own. In the North Central Zone (comprising Kwara, Kogi, Niger, Nasarawa, Plateau and Benue) which is contiguous to Tinubu’s South West, the first five states are at present solid APC states which are undeniably going to vote for Tinubu. Remember that much of Kwara and Kogi are culturally and geographically South Western and only geo-politically North. Let us also remember that Niger is where Tinubu is the traditional title holder of Jagaba of Borgu, evidence of years of political bridge-building which is his key political forte.

In Niger and Plateau, Tinubu will also reap the benefit of his party’s hold on those states while in Benue which is the only state of the zone that is PDP, the fall-out between Atiku and Governor Wike and Governor Samuel Ortom’s sympathy and solidarity with Wike will tilt the balance of decision in favour of the Asiwaju.

South-South Zone (comprising Cross River, Akwa Ibom, Rivers, Delta, Bayelsa and Edo) is the contiguous zone to Peter Obi’s South East. All the states of this zone are almost solidly PDP but given the current wrangling between Atiku and the hierarchy of the PDP and Rivers State Governor Wike, the future of the presidential contest in these states cannot now be correctly predicted but what is likely to happen is that Tinubu will be the major beneficiary of the presidential votes which will be split among him and Peter Obi and Atiku.

Atiku’s immediate contiguous zone is the North West (comprising Kaduna, Kano, Kebbi, Katsina, Sokoto, Jigawa and Zamfara. Here, Atiku’s selling points are his religious affinity and kinship with many of the voters of the region. Unfortunately for him, however, this is one of the strongholds of Tinubu’s All Progressives Congress party. Those who owe Atiku votes on the basis of religious affinity also owe Tinubu their votes on the same consideration but will consider the higher point of party loyalty to which they can also derive their well-being. Those who stand to gain something from the APC will not lightly toy with that. They will all vote for Tinubu in rebuff of Atiku.

There is also the critical factor of mentorship, friend-making abilities and strategic calculation. Of the three, Tinubu is clearly a front-liner in each of them. Tinubu won the primaries of his presidential election based mainly on the sheer number of persons he has mentored over the years, the sheer number of friends he has made in the course of his political career and the rightness of his geo-political calculations.

It must be made clear that politics is not a game of sentiments. Most of those who participate in it are clear-headed individuals who do things pragmatically. That is why Obi’s wave-making will easily fade away when we get to the brass tacks next year. And as we again saw during the APC presidential primaries, Bola Ahmed Tinubu will not merely win the presidency, he will win it by such a run-away margin that it will constitute a monumental landslide that will exceed the votes of Atiku and Obi combined.

In addition to his political clout and spread, Tinubu is being complemented by a capable, competent and suave vice-presidential candidate in the person of Senator Kashim Shettima.

Because Shettima in on the ticket, it’s taken for granted that 99.9% of the voters in Borno and Yobe States will vote for the APC ditto Gombe because of its affinity to the people of Yobe and Gombe is also under the firm grips of the APC.

Shettima has made name and he is very popular in the North having served with distinction as the Chairman of the Northern Governors Forum.

On the other hand, the vice-presidential candidate of the PDP, Senator Ifeanyi Okowa has to contend with powerful forces in APC in Delta State such as Senator Ovie Omo-Agege. Similarly, the political feud between Atiku and Wike might not guarantee Rivers votes for the PDP.

For Senator Datti Ahmed of the Labour Party, he does not even have the political clout to attract votes from his native Zaria not to talk of winning the votes in Kaduna State.

Shettima is head and shoulder above all the vice-presidential candidates of all the leading political parties.

The enormous goodwill which Tinubu has sown all across the country over the years, his acknowledged generous spirit, his leading fight for this democracy we are all enjoying today during the heyday of military dictatorship, his well-known doggedness in fighting causes he holds dear and of course, the God factor which rewards people or strivers for the sweat of their brows, will help him to gain the biggest political diadem in the land, to the consternation, I think, of his ill-wishers