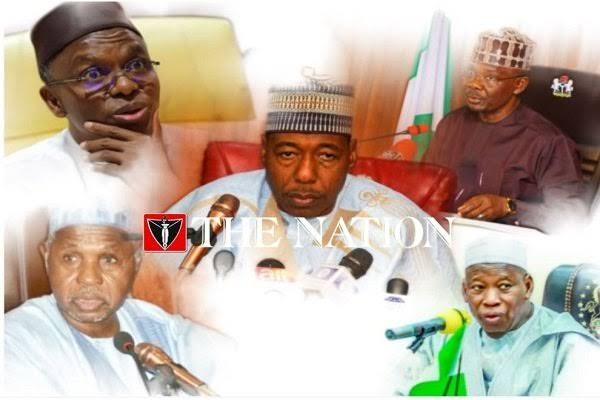 Although 2023 presidential election is still two years away, there had been debates over zoning of the top post.

The ruling All Peoples Congress (APC) and main opposition Peoples Democratic Party (PDP) are yet to make their positions known on zoning.

The southeast, southwest and south-south zones make up the southern region.

Southwest produced Olusegun Obasanj from Ogun State, who ruled for eight years. Obasanjo was president between 1999 and 2007.

The southeast comprising the Igbo states of Abia, Anambra, Ebonyi, Enugu and Imo are fiercely agitating for zoning of the presidential power in 2023.

Few other factors including numbers, influence, popularity and structure may determine where the presidency would be zoned to by the parties ahead of the 2023 poll.
But some Northern Governors have been vociferously campaigning for shift of the presidency to the south in 2023. They include:

Borno Governor Babagana Zulum recently said it is the turn of the South to produce the President in 2023.

Zulum spoke at the golden jubilee lecture and the public presentation of a book titled: ‘Strategic turnaround’ by the former Director-General of the Nigerian Maritime Administration and Safety Agency (NIMASA), Dr Dakuku Peterside.

Speaking on the topic: “Security and Economic Growth: Leadership in challenging times,” Zulum said: “Power rotation is a covenant between us, hence, the need to shift the power to South”.

He argued every part of the country should be given a sense of belonging. Zulum said there must be a demarcation between competency and loyalty.

Kaduna Governor Nasir El-Rufai also argued Nigeria’s next president in 2023 should emerge from the south.

“The southern part of the country is supposed to produce the president come 2023; I don’t support a northerner to vie for the seat after President Muhammadu Buhari, based on Nigeria’s political arrangement,” El-Rufai said.

El-Rufai said although the power shift arrangement among the various regions is unconstitutional, it is however a political design that must be respected.

The Presidency in 2023 must be zoned to the South, Kano State Governor Abdullahi Ganduje also recently stated.

The governor said he was not unmindful of the fact the Constitution does not have provision for zoning but that it was important to adopt it since it was strategic in winning elections.

Katsina Governor Aminu Masari also called for the rotation of the presidency in 2023.

He said the Southern region should produce the next President.

He said that a non-northerner should succeed President Buhari in 2023 in the spirit of equity, fairness and justice. His position tallied with views of some All Progressives Congress (APC) chieftains who have maintained there is an agreement on zoning.

He said it is necessary for the next President to come from the South.

The governor stressed for fairness and distribution, if the presidency is zoned to the South, the APC national chairmanship should be zoned to the North.

He said it would be unfair for him, having benefitted from power rotation, to denounce same.

“That is why, from all indications, I have never said anything against the agitation for rotation of the presidency to the South. It’s because I don’t think it’s a bad idea for peace in Nigeria, if there is rotational presidency,” Sule said.
(The Nation)

Makinde is Our Leader, Fayose Declares

I pity those who follow commercialised opinions on social media — Keyamo