2023: I Am Best, Most Experienced, Prepared Presidential Aspirant ― Osinbajo 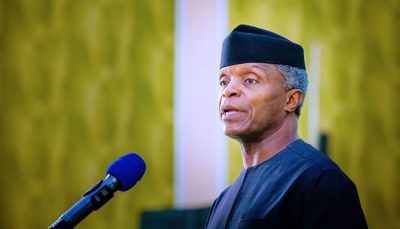 Vice President, Prof Yemi Osinbajo, on Thursday, maintained that he remains the best to clinch the All Progressive Congress (APC) ticket, just as he said he is the most prepared and experienced of all aspirants in the 2023 presidential election.

Osinbajo who stated this in Akure, Ondo state capital, while meeting with the party’s delegates ahead of the APC presidential primary election, expressed optimism about winning the party’s ticket at the primary, slated for May 30 to June 1.

While soliciting the delegates’ votes, Osibanjo said the country needs a leader with experience, courage, capacity and economic understanding that will rescue it from its current challenges.

According to him, his present position and his experience as Acting President would be useful to pilot the affairs of Nigeria if he is voted to power.

He noted that his mission was to inform the delegates of his intention to succeed the incumbent President Buhari having served under him loyally for seven years.

He said: “I am very happy with the reception in Ondo and I am also happier with the opportunity to be with delegates and share with them my vision.

“I am sure that the delegates also had a very good time interacting with me and quite interrogative about what my views are regarding the future of this country,” Osinbajo said.

Despite several laws prohibiting sexual harassment in Nigeria, many victims are forced to quit their dream jobs while others suffer depression as a result of unsolicited sexual advances from colleagues. FAITH ADEOYE reports.

If you want to keep your job and excel in your career, you need to do as I say,” Janet Abegunde’s boss said to her one fateful day. Miss Abegunde, a 24-year-old accountant who had just gotten her first job in one of the new generation banks, said she fell into depression after her boss sexually harassed her.