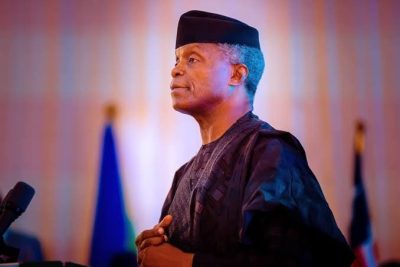 He appealed to delegates across the nation to consider Osinbajo, a multi-ethnic sensitive man as their preferred candidate during the party primaries.

Akem-Vingor appealed on Sunday during a virtual political discourse tagged ‘Think Osinbajo’ with members of the Osinbajo Think Tank Group.

He advised the delegates to shun money bag politicians in the interest of peace and national unity.

Akem-Vingir called on them to vote for Osinbajo, whom he described as the most prepared presidential aspirant of the party in the interest of national development.

“I appeal to you (delegates) to think about your children and grandchildren. Think of what kind of Nigeria you want to bequeath to them rather than the money bags may give you,” he said.

Describing Osinbajo as the fittest for the job, the retired general noted that the VP had never failed in his given mandates.

“I have known Prof. Yemi Osinbajo for over 30 years now and I can boldly say he is the most prepared among all candidates.

“He is intelligent, diligent and bold. He has the presence of the mind and he knows how to build his network as well as teams,” he said.

If elected as president, Osinbajo would loosen up the bureaucratic system that had been tying down the nation’s economy for years, he added.

According to Akem-Vingir, for Nigeria to improve as a nation, it needed a democrat such as Osinbajo as president to put in place peaceful policies that would create more jobs.

“Osinbajo is a democrat, who believes in the power of the state, rights of Nigerians, rule of law.

“We have seen him act in that manner many times. So it is only right for Nigerians to give him a chance to lead us,” he said.

“VP Osinbajo understands Nigeria, no doubt. He understands the socio-economic dynamics of the nation and the problem that is precipitating insecurity.

“He will tackle insecurity with a new strategy that will stop the menace,” he said.