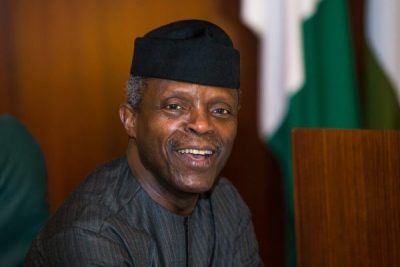 The Organised Private Sector for Osinbajo on Tuesday in Abuja said Vice President Yemi Osinbajo is better equipped intellectually to be the country’s next president in 2023 than the National Leader of the All Progressives Congress, Asiwaju Bola Ahmed Tinubu.

The group’s spokesman, Alhaji Abdulrahman Farouk, said this of Yemi Osinbajo in a statement on Tuesday in Abuja.

Farouk said Osinbajo was far better intellectually equipped than any current presidential aspirant for the task of leading the country’s economic rejuvenation towards future greatness.

According to him, though he did not explicitly mention the name of Tinubu, with Osinbajo as president, Nigeria’s organised private sector has much basis for optimism about post-2023 economic activities.

He stressed that Osinbajo’s consistent focus and insider knowledge of the objectives and challenges related to the President Muhammadu Buhari administration’s economic programmes were great advantages towards Nigeria’s economic rejuvenation.

He emphasised that Osinbajo’s candidature offers much hope for citizens who had high expectations about job creation, increased earnings and growth.

Farouk said: “Even though an aspirant has informed Buhari about his 2023 presidential  ambition, the most credible option still appears to be Vice President Yemi Osinbajo.

“And for the organised private sector as well as the citizenry, Osinbajo offers much fertile ground for hope to rapidly germinate.”

Tinubu had on Monday informed President Muhammadu Buhari of his intention to stand for the 2023 presidential election.

Osinbajo served as the Attorney General and Commissioner for Justice when Tinubu was the Lagos State Governor.

Tinubu also nominated Osinbajo as Buhari’s running mate when a Muslim-Muslim ticket of Buhari-Tinubu could not fly at the National Convention of the APC in Lagos State and before the 2015 presidential election.

Before the statement by Farouk on Tuesday, it was only Tinubu that had declared his interest in the 2023 presidential ticket of the APC.

However, as at press time, the Chief Whip of the Senate and former Governor of Abia State, Orji Uzor Kalu, and the Governor of Ebonyi State, David Umahi, had also declared their interest in the APC presidential ticket.

Farouk in the statement on Tuesday stressed that rather than mere sentiments, Nigerians must carefully weigh the past and current potentials of various candidates towards using their voter’s card responsibly in the 2023 election.

He noted that getting Nigeria’s economy to grow faster than the population was going to take a lot of consistent planning, discipline and integrity.

He said it would also take great consistency in implementation, adding that with his sharp focus, Osinbajo is expected to do well as president.

“Under his supervision, Nigeria’s social investment programmes have been ranked internationally, but much more good news should unfold when he is fully in the saddle by 2023.

“No declaration by any number of aspirants can douse the patriotic passion associated with those championing the cause of an Osinbajo presidency in 2023.”

The statement quoted Dr. Aliyu Kurfi, Chairman Progressive Consolidation Group, as saying that plurality of candidates and political parties are necessary for a robust democracy.

Kurfi added that a rich array of strong contenders would only deepen the legitimacy of Osinbajo’s eventual victory at the election.

He said: “As genuine democrats who believe in the progressive ideals that Vice President Osinbajo stands for, we welcome others into the race.

“We strongly believe that a plurality of candidates and political parties only enhances the robustness of our democracy.

“We are mobilising for Prof Yemi Osinbajo, a man who believes in the rule of law, a man who is a democrat and a great  progressive too; nothing in his antecedents ever speaks of anti-democratic standards.

“Therefore, we do not only welcome the declaration by an aspirant; in fact, we anticipate having half a dozen more, so that Osinbajo would emerge from a very rich array of choices offered to the nation by the APC.”

Kurfi added that the nature of the political competition envisaged shall be one characterised by politics without bitterness.

He said all members of pro-Osinbajo groups had been instructed to address other aspirants with courtesy and avoid getting drawn into the usual mudslinging associated with politics.

He said the PCG is confident that Osinbajo would enter and win the race by virtue of his good qualities and citizens’ expectations to see him build on the foundation laid by President Muhammadu Buhari.

Barber stabs neighbour to death for admiring his pregnant wife

How Eagles rated against Pharaohs