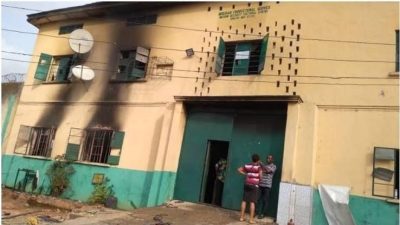 A total of 25 inmates, who escaped from the Jos Correctional Centre in Plateau State when gunmen attacked the facility in November last year, have been recaptured, while 220 others are still missing, The PUNCH learnt on Sunday .

Efforts to get across to the spokesman for the Plateau State Command of the Nigeria Correctional Service were unsuccessful.

However, a senior official of the service, who spoke to The PUNCH in Jos on Sunday on condition of anonymity, confirmed the development.

The source said, “You know that during the invasion of the correctional service facility in Jos by gunmen toward the end of November 2021, about 262 inmates were discovered to be missing. Later, it was discovered that nine of them were among those killed during the crossfire between security operatives and the attackers.

“So far, we have recaptured 25, who fled the correctional facility, while eight of them, who sustained injuries, are still recuperating at the Jos University Teaching Hospital. One of the injured inmates has been discharged from the hospital and I saw him yesterday (Saturday).

“So, if you subtract the 25 inmates, who have been recaptured, including the nine persons killed as well as the eight inmates from the 262 that were initially found to be missing, you have about 220 who are still missing. That is the situation for now”

The official said that the command had constituted a search team, which was working round the clock to apprehend the remaining inmates wherever they might be hiding.

“We have a search party now and the members are everywhere looking for the fleeing inmates. The other sister security agencies are also on the lookout for them. But you know, this kind of special assignment requires adequate funding to achieve the fastest results and that is the challenge we are facing,” the officials said.

He denied speculations that the increasing wave of kidnappings in the state was as a result of the activities of the fleeing inmates.

The source added, “I don’t think it will be completely correct to attribute the kidnappings in the state to the fleeing inmates. Remember they escaped from the correctional facility. So, why did they escape? Of course to hide from the authorities, who they know are looking for them. So, the truth is that most of  them, who escaped, are hiding and would not like to be seen.

“I’m not saying that one or two of them may not engage themselves in criminal activities, but the majority of them are hiding. Whatever be the case, the Nigeria Correctional Service is leaving no stone unturned to ensure that those who escaped from the Jos Correctional Centre are recaptured.” (Punch)

Deborah: None of my 7 children’ll go to school again, says…