2face’s Sisters Link Up With Pero Adeniyi In Abuja, Call Her The ‘First Lady’ 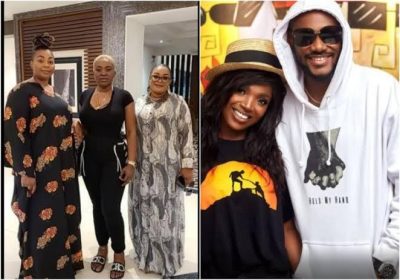 Photos from the outing were shared on Facebook by a lady, named Lucy Ogah, who is said to be related to the music mogul.

The seemingly innocent post has however raised dust on social media due to the suggestive caption she wrote. She described Pero as the ‘unbothered, unshakeable and unmovable first lady‘.

This has stirred mixed reactions on social media because it is coming at a time when Tuface and his wife, Annie, are having a marital crisis because of his relationship with Pero.

Earlier this week, Tuface and Pero were both pictured in the country’s capital, Abuja, howbeit in different locations.

Although both of them arrived at the F.C.T separately, some netizens still dragged the singer while hoping that speculations that their arrival in Abuja might just be a coincidence.