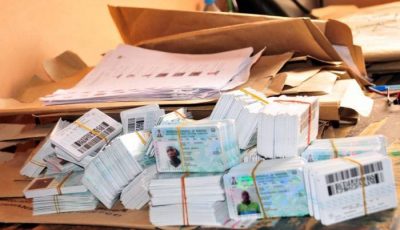 The Independent National Electoral Commission in Lagos State says 5,676,858 Permanent Voter Cards have been collected out of 6,630,661 received in the state between 2011 and 2021.

The News Agency of Nigeria reports that INEC Resident Electoral Commissioner for the state, Mr Olusegun Agbaje, disclosed this at a stakeholders’ meeting on the collection of PVCs with the leadership of political parties, civil society organisations and religious leaders on Thursday in Ikeja.

Agbaje, who commended all stakeholders for collaboration in the quest to build a sustainable democratic culture in Nigeria, said the commission was doing everything possible to deliver acceptable and credible elections everyone would be proud of in 2023.

He said, “It is pertinent to note that as of December 2, 953,803 PVCs were yet to be collected by their owners.

“These uncollected cards and the expected PVCs for fresh registrants, transfer or review from January to July will be available for collection in all INEC offices across the state from Monday, December 12.

“Owners of transferred, defaced or other incident PVCs should bring along with them the old PVCs for exchange with new ones.”

Agbaje said the deadline was to aid INEC preparations in line with sections 24 (2&3), 47 (3) and 51 (2) of the Electoral Act 2022, in case the margin of lead between the two leading candidates in an election was not more than the total number of voters who collected their PVCs in polling units where elections were postponed, voided or not held.