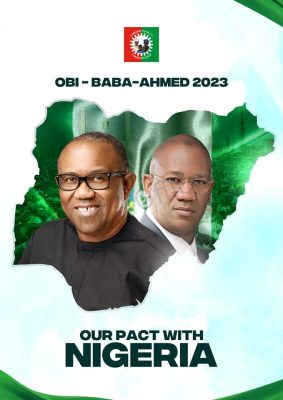 A Manifesto without a corresponding Action Plan is not very useful. Nigerian politicians are still not getting it! We are past the days of mere Manifestos and should be in the era of ‘Actionable’ manifestos, that is; Manifestos that have correlating Action Plans.

A manifesto is simply a written statement of the beliefs, aims, and policies of an organization, especially a political party. Taken to a higher level of abstraction, a manifesto remains just a statement of intent and herein lies the quandary. We are past the stage of intentions, political parties should state clearly their plans for each lofty or not lofty intentions they have, otherwise their manifestos are as useless and worthless than the cost of the paper they are typed on.

The Buhari government has had impact on infrastructure (rail, roads, sea ports and airports).It has had impact on Social Investment programmes that gave rise to a Ministry of Humanitarian Affairs. It has impacted agriculture, with investments through the CBN’s Anchor Borrower’s Programme..

The administration has also had impact in the Communications’ sector that have seen the contribution of that sector to the GDP increase phenomenally.

The government has similarly done a lot in the oil sector, with the commercialisation of the NNPC into a public Company and the intervention in the Niger Delta region that led to relative peace in 7 years etc.

Thus, it is plain puerile strategy for any political party to seek to foist on us their intentions when they can actually tell us what they will do in all the sectors mentioned above.

A serious opposition or contender for the position of the President should exhibit knowledge of the terrain, the history of the past, the present which will be a thorough dissection of where we are, that is, what has been done and then, they may then project into the future and tell us what they will do, either to advance what has been done or differently, what they will do.

Why would the opposition parties not understand this?

Nigeria requires more than lofty intentions and actors who wax lyrical. Nigeria needs people who already know the problems because they have a thorough grasp of all the issues that are prevalent, and they also have a blue print of the actions they will take to address the issues.

It is from this prism that I take serious umbrage with Papa Atiku of the PDP, who appears to be in denial of the current economic indicators of growth that Nigeria has recorded and still records as confirmed by the World Bank, IMF etc.

Atiku is stuck in antiquity of his pre-APC era. He continues to affirm the issues of old as the current issues that he will tackle. This is very curious strategy indeed, because it shows him off as being bereft of knowledge about the nation he so ‘desperately’ seeks to govern.

I also take umbrage with Peter Obi’s manifesto. It reflects a man who is throwing PVCs in medical parlance (premature ventricular contractions). These PVCs are extra heartbeats that begin in one of the heart’s two lower pumping chambers (ventricles) and that disrupt the regular heart rhythm, sometimes causing a sensation of a fluttering or a skipped beat in the chest. The 7 point Agenda of his Manifesto is in the image and for every point in his agenda, I simply have added the word “HOW” at the end?

I also take umbrage with Peter Obi’s manifesto. It reflects a man who is throwing PVCs in medical parlance (premature ventricular contractions). These PVCs are extra heartbeats that begin in one of the heart’s two lower pumping chambers (ventricles) and that disrupt the regular heart rhythm, sometimes causing a sensation of a fluttering or a skipped beat in the chest. The 7 point Agenda of his Manifesto is in the image and for every point in his agenda, I simply have added the word “HOW” at the end?

The manifesto is lacking in how he will do any of his intentions. What does he mean by “securing Nigeria, ending banditry etc? Has the FGN not been doing this for the past 8 years? So HOW will he do this differently from what has and is being done? Without giving an inkling as to his plans, how do we evaluate him? Moving Nigeria from consumption to production: How? Restructuring ? How? Leapfrogging? How?

The curious case for Obi is that the Labour Party which he has adopted as his platform stands for everything other than what PO needs to do to fix Nigeria.

For example, the Party is anti-subsidy removal, but PO knows that this is inescapable. So, PO is in quandary, and this reflects in his manifesto. He has decided to stick with intentions.

It was frustrating to watch and hear on TV, the Deputy National Chairman of the Labour Party, Ayo Olorunfemi say that the LP is looking at implementing a new minimum wage of between N80,000-N100,000 as against the N30,000 obtainable at present. It is great that they were able to tell us the current state and project a 150% increase. It is however disappointing that there is no whiff or how this lofty intent would translate to action in a nation grappling with poverty, unemployment, high inflation etc.

I am quite disappointed that the media is not grilling these politicians. We all must be involved in asking the difficult questions as follows:

How will we increase the tax revenue in Nigeria?

How do we build our institutions to block corruption?

How do we get the youths to embrace nationalism and credible work ethics?

How do we encourage the private sector to create more jobs?

How do we break the hold that drugs have on our citizens?

How do we get our educational system right?

How do we address the issues around nationalism and those agitating for a break up.

How do we have a national ethos that every Nigerian will be proud of that will make us want to do right by Nigeria.

In my judgment, the manifesto of the APC is the only one that gives me some comfort.

First it does not paint the picture of hopelessness that the other parties paint. It is termed Renewed Hope 2023 and its introduction takes account of the past and the current and specifically promises a path to growing not against the trajectory already laid but building on it.

The APC Manifesto has been in the public domain almost since campaigns became legal.The APC manifesto touches on key sectors and gives action plans of the interventions it will make in those sectors.

My verdict is this, only one party at present takes this campaigns serious and this party is the governing party.

The opposition have had 7 years to scrutinise everything the ruling party has been doing and to be ready to give credible critique and have their plans in place. Nigeria is not an experiment. It is a country that desires and deserves a solid chance to fly on the wings of structured and sound plans.

*Iyabo Awokoya nee Fawehinmi is a seasoned development consultant and lawyer of several decades based in Lagos.