A$AP Rocky back in court November over firearms felony charge 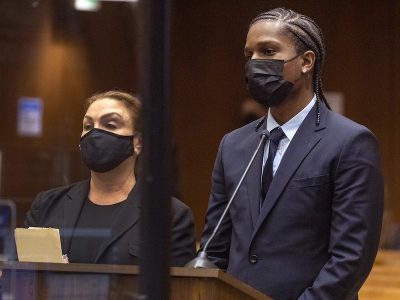 Rapper A$AP Rocky has pleaded not guilty to felony firearms charges at Los Angeles criminal court, four months after he was arrested after landing in a private jet with Rihanna.

A$AP showed up at the court Wednesday all suited up for his arraignment, TMZ reported.

He entered his plea to both charges of assault with a semiautomatic firearm.

A$AP is accused of firing shots at A$AP Relli, a former friend, during a dispute in Hollywood back in November. Relli claims bullet fragments struck him, causing an injury to his hand.

He is suing Rocky over the incident.

Mayers, 33, was arrested in April and later released on bond.

District Attorney George Gascón announced the felony charges on Monday, saying Mayers is facing allegations of personally using a firearm during an altercation.

The LAPD said the victim suffered a minor injury from the shooting.

“Discharging a gun in a public place is a serious offence that could have ended with tragic consequences not only for the person targeted but also for innocent bystanders visiting Hollywood,” Gascón said in a statement Monday.

“My office conducted a thorough review of the evidence in this case and determined that the addition of a special firearm allegation was warranted.”