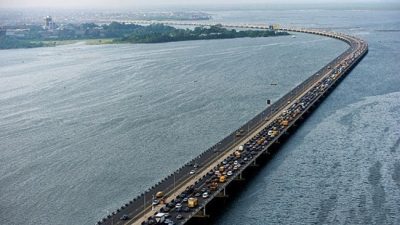 Another tragedy occurred on the popular Third Mainland Bridge recently as a middle-aged lady later identified as Adetutu Adedokun, alighted from an Uber car and dove into the waters of the lagoon below. Tutu—as she was fondly called by her friends and acquaintances, was a senior DSS personnel who had distinguished herself as an unarmed combat operative.

The driver of the taxi later revealed that Tutu had been having a heated phone call with her fiancé before alighting from the car. But it is scary how just a heated phone conversation could be enough to trigger a young, beautiful lady into ending her life. A lady who had had everything going for her, her troubled romantic life, notwithstanding.

The Third Mainland Bridge is the longest of three bridges connecting Lagos Island to the Mainland. It is the longest in Nigeria and was the longest in Africa until 1996 when the 6th October Bridge located in Cairo was completed. The 11.8-kilometre bridge was built by Julius Berger under the then Military President, General Ibrahim Badamasi Babangida to reduce traffic congestion, but it has gradually assumed a darker, terrifying purpose. Over the years, it has become a spot for some Nigerians to end their lives. The beloved Tutu has now joined the list of Nigerians who have either attempted to or succeeded in committing suicide from the railings of the bridge.

Shortly before Adetutu committed suicide, there was a video which quickly went viral on social media platforms. In this video, an old man could be seen holding onto the railing of the Third Mainland Bridge, apparently ready to end his life. This elderly citizen stubbornly rejected pleas from concerned individuals who tried to restrain him before he plunged downwards into the lagoon.

In March 2017, a medical doctor, Allwell Orji, asked his driver to park on the bridge while he came down from the car and hastily jumped into the lagoon. The nation was yet to heal from this, even as a textile dealer on the Lagos Island, Titilayo Momoh, attempted suicide at the same spot, but was rescued due to the swift response of mobile policemen on a routine patrol.

In November 2018, a middle-aged man and official of the Federal Radio Corporation of Nigeria, Sheriff Oladejo, hurriedly came out of a car and jumped into the lagoon. In May 2019, an unemployed Accounting graduate attempted suicide at the same spot, but was rescued by some Rapid Response agents on patrol. And in October of that same year, officials of the Lagos State Emergency Management Agency rescued one Ayinla Rilwan, who had attempted to dive into the lagoon from the bridge. On February 2, 2020, a police team from Bariga Division on routine traffic patrol spotted an old man attempting to jump into the water and swiftly rushed to his rescue.

The list is endless. These Nigerians who have either committed or attempted to commit suicide surely had grave reasons why they decided to end it all in such a dramatic manner. Many people have long proffered solutions to potentially stem the recurrence of suicide cases on the Third Mainland Bridge. One of such solutions is the proposed construction of a suicide barrier like that of the Prince Edward viaduct bridge in Toronto. However, it’s ironically funny how everyone is considering solutions to stop the tide of suicides on the bridge, but nobody is actually talking about the root causes of this upsurge of suicides and failed attempts in the first place, as well as how to tackle them. By now, it should be clear that merely constructing suicide barriers around bridges would not stop depressed or troubled Nigerians from ending their lives using other means.

The rising spate of suicides in Nigeria is quite worrisome. Dr. Titilayo Tade of the Lagos University Teaching Hospital said that, “The suicide rate in Nigeria in 2019 is 6.9/ 100,000, which is higher than 6.5 rate in 2012; but under-reported or miscued. Nigeria has the highest rate of suicide and depression in Africa, the current rate of suicide in Nigeria is 9.50% out of 100, 000 people.” As much as these staggering statistics are subject to rigorous debate, they actually serve to highlight just how quickly suicide is becoming an escape route for many troubled people.

In a report, the police in Oyo State said they had recorded at least 10 suicide cases in the state between June and September 2022. In December 2020, Dapo Ojora, a top Lagos socialite committed suicide. Also on September 28, 2022, Laolu Martins, one of the co-founders of a popular eatery in Lagos State, Bukka Hut, also committed suicide in Lekki. On 20th October of this year, a young lady in Osun State lost her job and decided to end it all by jumping into the Osun River from Gbodofon Bridge on the Gbongan–Osogbo Road.

It is also interesting to know that, the act of killing one’s self is regarded a heinous crime in Nigeria. According to section 327 of the Nigeria Criminal Code Act, an attempt to commit suicide is punishable by 1 year in prison. Section 326 of the same Act also states that “a person will be charged with a felony and will be liable to life imprisonment if he or she aids, counsels, or procures another to kill himself.” The lawmakers who drafted this law did so with the hope of stemming the tide of suicides in Nigeria, but imprisoning someone for attempting to end their life is as good as adding insult to the injury.

There are several factors that lead one to commit suicide. These factors range from depression to mental illness to feelings of hopelessness, substance abuse, et cetera, et cetera. According to reports, one of the major causes of suicide in Nigeria is depression as a result of loss of means of livelihood or other extenuating factors. But then, no matter how difficult things are, suicide should never be an option. This is because suicide doesn’t end the pain; it only shifts it to others—family, friends, acquaintances and even strangers on the brink.

Those going through existential challenges should be made to understand that there is light at the end of the tunnel. All that is required is to just hold on and soldier onwards, because tough people eventually conquer tough times. Granted, we still have a lot to do to stem the tide of suicides in Nigeria. But for a start, we can all help by prioritizing the subject of mental health, being increasingly mindful of the effects of our deeds and actions on others, as well as making sure to often check up on our friends and acquaintances.

Zayd Ibn Isah writes from Abuja. He can be reached via [email protected]

Why I didn’t interfere in Assembly crisis – Oyebanji

TINUBU: The obsessions of David Hundeyin