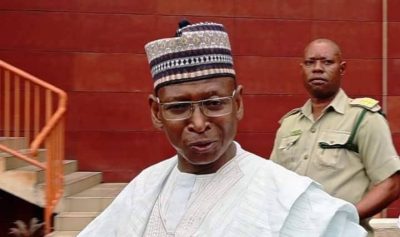 Ahmed Idris, suspended accountant-general of the federation, is seeking a plea bargain in a criminal suit preferred against him by the Economic and Financial Crimes Commission (EFCC).

In May, TheCable had reported how Idris was arrested in Kano after he failed to respond to invitations by the commission to answer questions over the allegation of N80 billion fraud.

On July 22, Idris was arraigned on a 14-count charge alongside Godfrey Olusegun Akindele, Mohammed Kudu Usman, and a firm — Gezawa Commodity Market and Exchange Limited.

At the court session on Wednesday, Rotimi Jacobs, counsel to the EFCC, told the court that Idris and his co-defendants had, through a third party, requested to meet him to negotiate the plea bargain arrangement.

“But my reply to them was that I could not meet them in the absence of their lawyers.

“By the nature of our calling, we must be open and transparent.

“Since section 270 of the Administration of Criminal Justice Act encourages settlement and plea bargaining, I told them to come with their lawyers and that I would also invite the investigators to come for the meeting.”

However, the prosecutor said the meeting which was to hold last Monday was called off after a lawyer from the chambers of Chris Uche, counsel to the suspended accountant-general, came to his office to protest their exclusion from the arrangement.

“One of the lawyers in the team of the girst defendant, Mr. Kanayo Okafor, came to my office at the EFCC and protested that they were not carried along and that his client would not come for the meeting,” Jacobs said

“I later spoke with the senior counsel, chief Uche, SAN, for more than 30 minutes over the matter and he protested that we did not invite them.

“It was at that point that I decided to call the meeting off, even though the senior lawyer eventually pleaded that it should go on.

“I called it off because, in the first place, the meeting was at their instance. So, none of the defendants entered the EFCC premises or came for the meeting.”

Responding, Goddy Uche who represented the first defendant (Idris), insisted that his client and his co-defendants were at the EFCC office for the meeting, but declined to go further with the negotiation after they were asked to go to the office of the EFCC chairman.

“My lord, I could not interview my client on Monday as slated because he was at the EFCC [office],” he said.

“Surprisingly, he was at the EFCC [office] but his lawyers were not carried along. We had thought that one of the prerequisites for charging a matter in court is that the prosecution has concluded its investigations.

“We find it contemptuous that a matter already before the court could be tried in the office of the EFCC chairman. That is not good practice. We were deprived of the opportunity to meet our client to be able to properly prepare for his defence.”

Adeyemi Ajayi, the presiding judge, adjourned further proceedings on the matter till October 4. (The Cable)