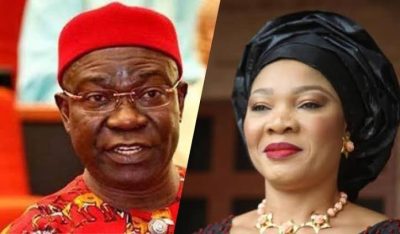 Gavin Irwin, lawyer to former Deputy Senate President, Ike Ekweremadu, told Uxbridge Magistrates’ Court that the Senator had led a blameless life, and that the allegations against him were “nothing short of preposterous”.

Ekweremadu and his wife Beatrice, were, yesterday, remanded in the UK Police custody, after they were arraigned before the Uxbridge Magistrates’ Court for alleged conspiracy to facilitate the travel of another person for organ harvesting.

The UK Metropolitan Police had, in a statement confirming the arrest of the couple, said the duo were charged to court, following an investigation by the police’ specialist crime team.

According to the Metropolitan Police, investigation was launched into the allegation, after detectives were alerted to potential offences under modern slavery legislation, in May 2022.

A statement by the police department said: “A child has been safeguarded and we are working closely with partners on continued support. As criminal proceedings are now under way, we will not be providing further details.”

The statement read:  “Beatrice Nwaneka Ekweremadu, 55 (10.9.66) of Nigeria is charged with conspiracy to arrange/facilitate travel of another person with a view to exploitation, namely organ harvesting.

“Ike Ekweremadu, 60 (12.05.62) of Nigeria is charged with conspiracy to arrange/facilitate travel of another person with a view to exploitation, namely organ harvesting. They have both been remanded in custody and will appear at Uxbridge Magistrates’ Court later today (yesterday).”

At the court hearing on yesterday, Prosecutor Damla Ayas said: “It is conspiracy in relation to human trafficking offences for the purposes of organ harvesting. The victim in this case is 15 years old. They, the couple, were interviewed at the police station. Both of the defendants have provided a prepared statement.

Ekweremadu and his wife had separate legal representations and prayed the court to release them on bail, but their prayer was, however, dismissed by the Magistrate. The couple has surrendered their passports to the UK government.

According to sources, the red flag that stopped the organ from not being harvested came after the boy truthfully disclosed his age to the doctors at the Royal Free Hospital in the UK. The doctor reportedly cancelled the procedure.

The boy was taken from family who, according to the prosecutors, treated him like a slave, after he escaped and found his way to the Police, where an investigation started, leading to the arrest of the couple.

In a letter by Ekweremadu addressed to Visa Section of the British High Commission, Abuja, dated December 28, 2021, acknowledging support for the visa application by alleged victim, Ukpo Nwamini David, for the purposes of undergoing medical investigation for a kidney donation to Ms Sonia Ekweremadu.

The letter reads: “ I am writing in support of the visa application made by Mr. Ukpo Nwamini David, who is currently having a medical investigation for a kidney donation to Ms Sonia Ekweremadu. David and Sonia will be at the Royal Free Hospital, London, and I will be providing the necessary funding. I have enclosed a statement of my account.”

In his defence at the court hearing, Ekweremadu’s lawyer, Gavin Irwin, said:  “There is no question this is a serious allegation. Mr. Ekweremadu is a member of the Senate in Nigeria. He has previously held an even more senior role as deputy president of the senate.

“He is a member of the bar in Nigeria. He is a principal in a law firm that bears his name. Those issues taken together go way beyond him being a person of good character…rather that he has led a blameless life as a public servant.” Mr. Irwin added that the allegations were “nothing short of preposterous”.

Antonia Gray, representing Mrs. Ekweremadu, in her opening defence, said: “She has never been complicit or involved in any alleged illegal trafficking of any young person. She is a financial accountant, with an unblemished record.”

In her application for adjournment, Ms Ayas said: “In respect of these offences, Attorney General’s consent is required and the Crown require 14 days for that to be obtained.”

In a short ruling, Magistrate Lois Sheard said: “These are serious allegations and these matters are now adjourned until July 7, 2022, back here at Uxbridge.” Ms Sheard remanded both defendants into custody, ahead of their hearing.

Ekweremadu and his wife may face life imprisonment if found guilty and convicted to maximum sentence under the United Kingdom’s Modern Slavery Act 2015 (MSA 2015).

The act partly reads: “Under s 2, an individual commits an offence if they arrange or facilitate the travel of another with a view to that person being exploited. It is irrelevant whether that person consents to the travel, or whether they are a child or an adult.

“Under s 3 of MSA 2015, exploitation includes: slavery, servitude and forced or compulsory labour; sexual exploitation (which involves the commission of an offence under s 1(1)(a) of the Protection of Children’s Act 1978 (indecent photographs of children), or Pt 1 of SOA 2003 (eg, rape or sexual assault); removal of organs where a person is encouraged, required or expected to do anything which involves the commission of an offence under ss 32 or 33 of the Human Tissue Act 2004 (prohibition of commercial dealings in organs and restrictions on use of live donors); securing services etc by force, threats or deception; securing services etc from children and vulnerable persons (eg, physically or mentally ill or disabled).”

It further stated that anyone found guilty of “human trafficking is liable, on summary conviction, to 12 months’ imprisonment and/or unlimited fine,” adding that “on conviction on indictment, the maximum sentence is life imprisonment.”
(Vanguard)