Luxury is not a household marker; it is an exclusive right. While the requirements for standing out in these contemporary times aren’t much to write about, there’s still a trick to being outstanding. This is the lesson that Abisola Kola-Daisi would have the rest of us learn—especially in such lean times. 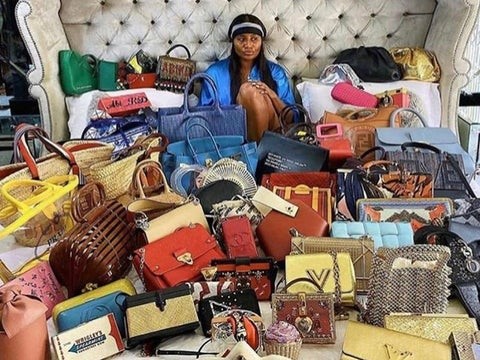 Among the many trending subjects on social media today is one that involves the daughter of former Oyo State Governor, Abiola Ajimobi. This is the case wherein the delectable Abisola Kola-Daisi showed off her expensive designer bags—all of which someone estimated to be valued at several million dollars. Even as her father is recovering from COVID-19 in Lagos hospital.

According to the established and celebrated business lady, sitting on her bed and surrounded with her babies from Louis Vuitton, Chanel, Burberry, Hermes, Gucci etc. was her way of taking a break from all the crazies, and counting her blessings.

Rihanna Takes Her Fenty Underwear Advert to A Spicy Hot…

Kola-Daisi’s display raised a bit of a racket. While there were some folks who were inspired by her expensive display, there were others who thought —and labelled—the whole thing a wicked shenanigan. One of these latter categories called Kola-Daisi out, and accused her of staying silent in the face of ongoing social and gender crisis—and spending all her time playing with bags.

Always the humble soul, Kola-Daisi did not remind the person that the bags were her own, purchased with her own money and her sweat. Instead, she explained to her critic that she was indeed using her voice and influence for the sake of the oppressed.

This is not the first time Abisola Kola-Daisi is facing criticism for her high-quality tastes. Not too long ago, she raised eyebrows when she stepped out in a Miu Miu Embellished Printed Twill Mini Dress worth #1.5 million. There is also the more recent one in which she took on a challenge and displayed some of her shoes for the world to see—another display of an expensive shoes collection that most can only dream of. But the lady has the means to acquire such premium accoutrements.

Abisola Kola-Daisi is the CEO of Florence H Boutique, a luxury shoe and accessories store in Victoria Island, Lagos. She is also the wife of Kola Daisi, son of Chief Kola Daisi, the business mogul of Ibadan nativity.

There is thus no helping it; a girl’s bags are a consolation in difficult times.  (Thisday)

PHOTOS: Ooni of Ife takes the runway at fashion show in Lagos

How I built a fashion empire from picking tiles – Kiki Osinbajo