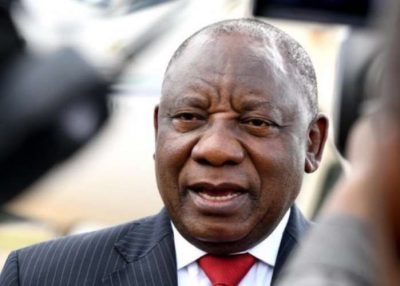 South African President Cyril Ramaphosa said on Wednesday that the governing party “could and should” have done more to prevent corruption under his predecessor Jacob Zuma, in highly anticipated testimony to a graft inquiry.

Ramaphosa, Zuma’s former deputy, was appearing in his capacity as current leader of the African National Congress (ANC) in a rare case of a sitting president giving evidence on recent alleged acts of wrongdoing by members of his own party.

The “state capture” inquiry is probing allegations of graft during Zuma’s nine years in power, including that Zuma allowed businessmen close to him – brothers Atul, Ajay and Rajesh Gupta – to influence policy and win lucrative government contracts.

Zuma and the Guptas have consistently denied the allegations against them.

Ramaphosa told the inquiry it took time for the party to recognise high-level corruption during the period, but that he would not try to “make excuses or to defend the indefensible”. He did not mention Zuma by name in his opening remarks.

“We all acknowledge that the organisation could and should have done more to prevent the abuse of power and the misappropriation of resources that defined the era of state capture,” he said.

After he won a closely fought battle for the ANC leadership against Zuma’s ex-wife in December 2017, his allies in the party engineered Zuma’s ouster, allowing him to take over as head of state in February 2018 before Zuma’s second five-year term was due to end.

Over several days of testimony, the inquiry’s lawyers are expected to ask Ramaphosa what he knew about allegedly corrupt practices while serving alongside Zuma, as well as why he did not act to stop them.

Ramaphosa has made the fight against graft one of the central pledges of his presidency. Under his watch the ANC has tightened disciplinary measures to deal with members implicated in corruption or other serious crimes.

Zuma appeared briefly at the inquiry in 2019 but defied a summons and court order to give evidence earlier this year.

The inquiry’s lawyers are seeking Zuma’s imprisonment as a result.

Buhari, Atiku, Ishaku others mourn as ‘Mama Taraba’ dies at 61

Buhari extols General Dogonyaro, describes him as a thoroughbred soldier