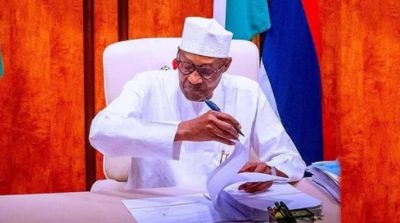 It was earlier reported that Buhari may have appended his signature to the piece of legislation.

Some online platforms, yesterday, published a story claiming that the President had signed the bill which was transmitted to him last week Friday.

The Senior Special Assistant to the President on National Assembly Matters, Senator Jide Omowarare was reported to have hinted that his principal may have signed the Electoral Act Amendment Bill into law.

But contrary to the report, more than one official source debunked the reports, saying it was untrue as the bill could not have been a signed-in secret.

The sources wondered when the bill was signed into law as the President had been out of the country in the last 48 hours and just returned to the country.

Senior Special Assistant to the President on Media and Publicity, Mallam Garba Shehu, who just returned to the country with the President, said the news of the signing, which had already gone viral on social media, was not to his knowledge, saying “it is news to me too”.

Also speaking in a telephone conversation, Senior Special Assistant to the President on National Assembly Matters, House of Representatives, Hon Umar El-Yakub, said the viral news could not be true, citing reasons for his conclusion.

“I also cannot tell you that he will still not sign it or will not sign it. He’s the President. But if it will be signed later, we will all know”, he added. (Vanguard)