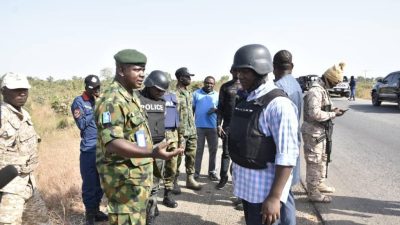 The twin incidents of attack on Nigerian Army Research Center in Biu Local Government Area and that of Mobile Police Training School in Gwoza Local Government Area, both in Borno State, has left much to be desired. leading to questioning the patriotism of some Nigerians.

This is necessary when looking at how the two ill-fated events were cheerfully circulated widely on social media, amidst being contaminated with a lot of misinformation while overlooking the grievous danger that this lousy action might have on national security.

Recall that on January 15, 2022, the insurgent group, Islamic State of West African Provinces (ISWAP), released a footage showing how its fighters stormed Buratai town in Biu LGA of Borno State, where Nigerian Army University Research Center for Strategic and Security Studies was located and ransacked the facility.

The video showed insurgents attacking Tukur Yusufu Buratai Institute for War and Peace, firing in different directions, pulling down flags on the campus and equally torching some military and official vehicles.

It is pertinent to learn that most of the staff of the institute, including the military and civilians, were yet to resume from the new year holiday as at the time of this heinous act. The attack happened on January 10, 2022.

However, it is disheartening to learn that some section of unpatriotic Nigerians has found this unfolding event worthy of celebration, thereby busy sharing the videotape on various social media handles. More worrisome is the fact that these merchants and peddlers of fake news also went ahead to insinuate that a number of Nigerian military personnel were equally abducted during the attack in addition to armouries that were looted.

To refute this disinformation, a detailed fact-checking analysis conducted by PRNigeria revealed that the facility has actually come under attack by the terrorists, but no military personnel was either killed or abducted in the process. Meanwhile, there is no evidence to prove that armouries were carted away.

PRNigeria quoted a senior military commander as saying: “The institute has no armoury that terrorists could attempt to loot. While no single army personnel was abducted or killed, regrettably two civilians died during the incident.”

Interestingly, in what was described as “Sweet Attack,” a few days after attacking the Army Institute, Nigerian military troops successfully eliminated scores of ISWAP fighters on a mission to attack Biu town, PRNigeria reports indicated.

In addition, the troops also destroyed some gun trucks and recovered a large cache of weapons from the insurgents. The troops were alerted after getting credible intelligence on the movement and strategic planning of the insurgents to attack Biu town.

The Borno State Commissioner of Police, Abdul Umar, confirmed the attack at the training school, but he however disputed the reports claiming that an undisclosed number of police instructors were kidnapped by the insurgents as widely circulated on social media. He also added that the insurgents were successfully repelled by policemen.

“The Command wishes to categorically debunk the news, consider it as fake news, and also to inform the general public that the insurgents, who attacked the PMF training college on the 13th January, 2022 at about 2022hrs were successfully repelled by our gallant officers and men. The police did not record a single casualty or loss of firearms,” the police chief said.

These two overwhelming victories recorded by the Nigerian troops over the dreadful and monstrous Boko Haram/ISWAP insurgents did not garner much recognition and wide media coverage (especially social networking platforms) similar to the attention recorded when the terrorists attacked the two facilities. Does it mean that some Nigeria’s citizens are more jovial when the criminal element’s record wins against our gallant and ever-ready sacrificing troops?

Both citizens and the media should know that this attitude of irresponsible and insensitive reporting of activities related to either bandits or terrorists is doing significant damage to the architectural framework of national security. Because, whenever their [bandits or terrorists] activities are reported in exaggerated manner, it increases their vigor to launch more attacks, while on the other way round, the morale of our troops is drastically diminishing and dampening.

Eventually, this situation instill fear on the minds of citizens and uncertainty thereby leading them to start to lose hope on the troops and equally cast doubt on their capability to containing the situation. This is rather a great setback to the fight against the criminal elements that the Nigerian forces has been doing, which is a must-win battle for all of us, so as the country can continue to remains as a corporate entity.

It is gratifying to learn that Nigerian forces are currently gaining impetus in this insurgency war, recording a lot of success on several occasions. It is not long that two high profile bandits’ kingpins operating in Zamfara axis, Alhaji Auta and Kachalla Ruga, were successfully eliminated by multiple airstrikes of the Nigerian air force fighter jets. In the same vein, several ISWAP commanders were also neutralized which forced the insurgent group to reshuffle their cabinet.

In another development, thousands of Boko Haram fighters have surrendered to the Nigerian Army and others are still following the suit. This is due to the “non-kinetic” soft approach strategy to tackling insecurity employed by the Nigerian military.

In light of the above, it is apparent that this is a critical time whereby the media can play its vital role in surmounting security challenges troubling the country through adopting responsible and developmental journalism. meanwhile, people in the affected zones should continue to help the security forces with credible intelligence which is very vital to the success of this long overdue war against terrorism and other form of criminalities in Nigeria by the troops.

Are they celebrating attack on the troops?
0
Share FacebookTwitterGoogle+ReddItWhatsAppEmail