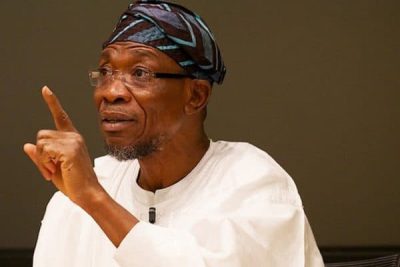 Gboyega Famodun, Chairman-elect of the All Progressives Congress in Osun State, says the party is too strong for the Minister of Interior, Rauf Aregbesola, to break.

The APC Chairman said this in reacting to a statement credited to Aregbesola that the party was deeply factionalised.

Famodun described the development as unfortunate.

According to him, it is unfortunate that the minister, who was the immediate-past governor of the state, could champion subversive activities against the political party that made him.

It would be recalled that Aregbesola on Friday, during the inauguration of the Digital Nigeria Centre in Ilesa, said that the APC in Osun Stater was deeply divided, adding that he belongs to the other faction, The Osun Progressives.

Aregbesola had said: “For those who don’t know, APC is divided into two here (Osun).

“We have APC, Rauf Aregbesola’s faction, which is chaired by Hon. Razaq Salinsile, and the other.

“When it’s time, we will settle it.

“The caucus that birthed our own faction of APC is called TOP.

“Those wondering whether I belong to TOP or not should open their ears widely.

“I am TOP, body and soul and the Chairman of TOP is Adelowo Adebiyi.”

In a swift reaction, Famodun said in a statement on Saturday in Osogbo that Aregbesola should forget the thought and notion of being “the Alpha and Omega of Osun State Progressive politics”.

He said: “It is unfortunate that Aregbesola, who was the immediate-past Governor of the state could champion subversive activities against  APC in Osun.

“This is political party that transformed his life from that of obscurity to limelight, through prestigious offices, as a Commissioner in Lagos State, two terms Governor of Osun and a serving minister of the Federal Republic of Nigeria.

“His recent statement in Ilesa reduces his status as a former governor and as a serving minister of a party he claimed to belong.

“Osun APC is too strong for Aregbesola to break.

“He should be told that there is no amount of intrigues by him that is capable of bungling the second term ambition of Gov. Oyetola.”

The News Agency of Nigeria reports that the Independent National Electoral Commission has fixed July 16 for the governorship election in the state.

Buhari gave me opportunity no other VP was given – Osinbajo