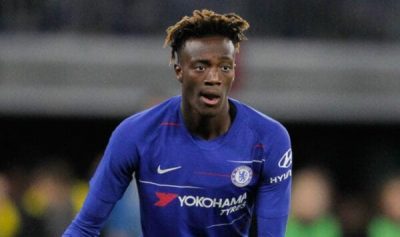 Arsenal are reportedly set to win the race to sign forward Tammy Abraham on loan from London rivals Chelsea.

The 23-year-old has fallen down the pecking order since the arrival of Thomas Tuchel in January, and the Blues are prepared to let him leave this summer.

Chelsea are looking to raise funds from player sales as they attempt to lure Borussia Dortmund’s Erling Braut Haaland, their primary target, to Stamford Bridge.
The Blues value Abraham at £40m, though Arsenal and other potential suitors are not prepared to match this figure.

However, a possible loan deal with an obligation to buy is to be discussed with the Gunners, who have moved ahead of Tottenham Hotspur and West Ham United for the England international, according to The Sun.

Abraham, who has two years remaining on his £80,000-a-week contract, scored 12 goals and provided six assists for Chelsea in 32 appearances last season.

Standby helicopter was to bring Igboho to Nigeria, but Yoruba indigenes fought — Lawyer