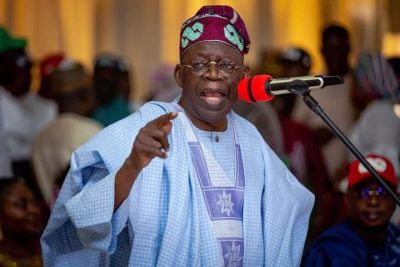 A support group rooting for the presidential ambition of Sen. Bola Tinubu, Asiwaju Project Beyond 2023, has lauded the meeting between the All Progressives Congress (APC) Candidate and former President Olusegun Obasanjo.

The Director-General of the group, Bar. Realwan Okpanachi, gave the commendation on Wednesday in Abuja during an interview with the News Agency of Nigeria (NAN).

NAN reports that Tinubu, in company of some chieftains of APC including the governor of Ogun, Mr Dapo Abiodun, visited and held a closed-door meeting with Obasanjo in his Abeokuta residence on Wednesday, with details of the meeting not made public.

Okpanachi said the political interpretation of the meeting was positive for the presidential ambition of the former Lagos State governor. He described Obasanjo and Tinubu as two great leaders who want the best for Nigeria and would be willing to work together to achieve such a feat.

The director-general described the visit was a tacit endorsement of his principal by Obasanjo, promising Nigerians to look forward to more of such from other national leaders who, according to him believe in Tinubu’s capacity to lead the country.

He added that the meeting had also proven as unfolded, initial speculations that the two leaders were political enemies.

“We, at Project Beyond 2023, commend the visit of our principal and the meeting he held with former president Olusegun Obasanjo today in Abeokuta.

“President Olusegun Obasanjo is a leader. He is a father, as far as Nigeria is concerned and the Southwest is concerned. And Asiwaju too is a leader and like a younger brother to Obasanjo. They are brothers.

“They are friends too, though people from outside make it look as if they’re political enemies, but they are not.

“They both have good hearts as leaders. So there’s nothing new about the visit, rather it is part of the ongoing consultation and homecoming for Asiwaju.

“And you can see that Nigerians have decided for us, Obasanjo does not want to see himself stand in the way of Nigerians as far as this election is concerned.

“It is a tacit approval and endorsement for us, you will see that the whole thing will come out to play.

“All the who is who in this country, including Obasanjo are in support because they believe in Tinubu’s capacity to reposition this country.

“They believe in his capacity to develop this country and bring it to where it should be among the comity of nations.

“They know what he achieved in Lagos as a governor, which is a micro Nigeria.

“If given the opportunity, he can replicate and do better in at the national level. And that is why you see all the leaders are coming together in one accord to give support as well you starting with Obasanjo visit today.

“You are going to see many leaders identifying and endorsing so as time goes on,” he said.

He went further to give an insight of the group which has been in existence for 13 years, saying it is different from other political support groups.

“For 13 years now, we have been assisting as a grassroots foundation propagating Asiwaju. We have been canvassing for people to believe and spread his political ideology.  This was before he indicated interest in contesting for 2023 election.

“Our group is intelligence-driven, we are into data collation. We are there to provide a platform for you to become president and even after becoming president, we are there to continue to be involved in policy formulation.

“We are going to be interfacing between Nigerians and the government. It therefore means that it is not all about the election, it is beyond the election.

”We are going to be actively involved before, during and even after the election, to be sure that will hold the government accountable and responsible,” he added.