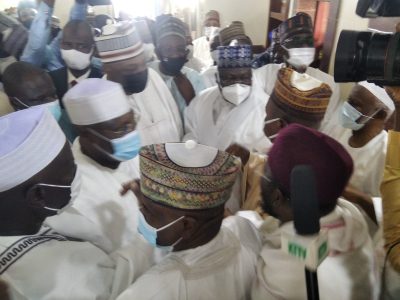 Governor of Katsina State, Aminu Masari, paid a N500,000 dowry to the bride’s family on behalf of the groom.

The officiating cleric, Sheik Abdullahi Bala Kau, in his sermon said one of the aims of marriage to strengthen kinship with friends and families.

He buttressed this with Prophet Muhammad giving out his daughters to his disciples and him marrying daughters of disciples.

“Prophet SAW gave out his daughter to Ali and two of his daughters to Usman. He also married the daughters of Abubakar and Umar. This is to further tighten the existing relationships between him and his close associates.”

Our reporter observed that Lawal and Saraki, who sat opposite one another, exchanged banters as the former asked the latter, which he heed to, to raise up his hands as the Imam was saying prayers. (Daily Trust)