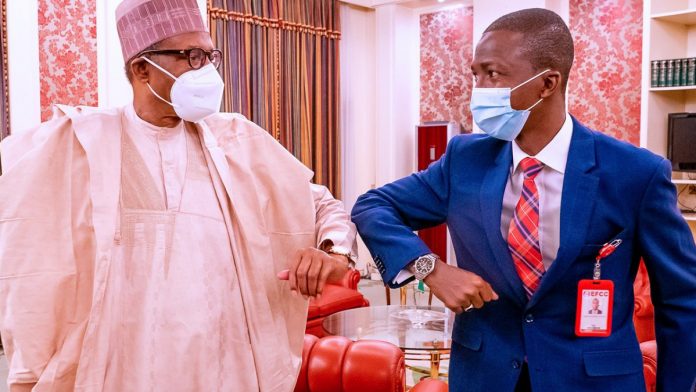 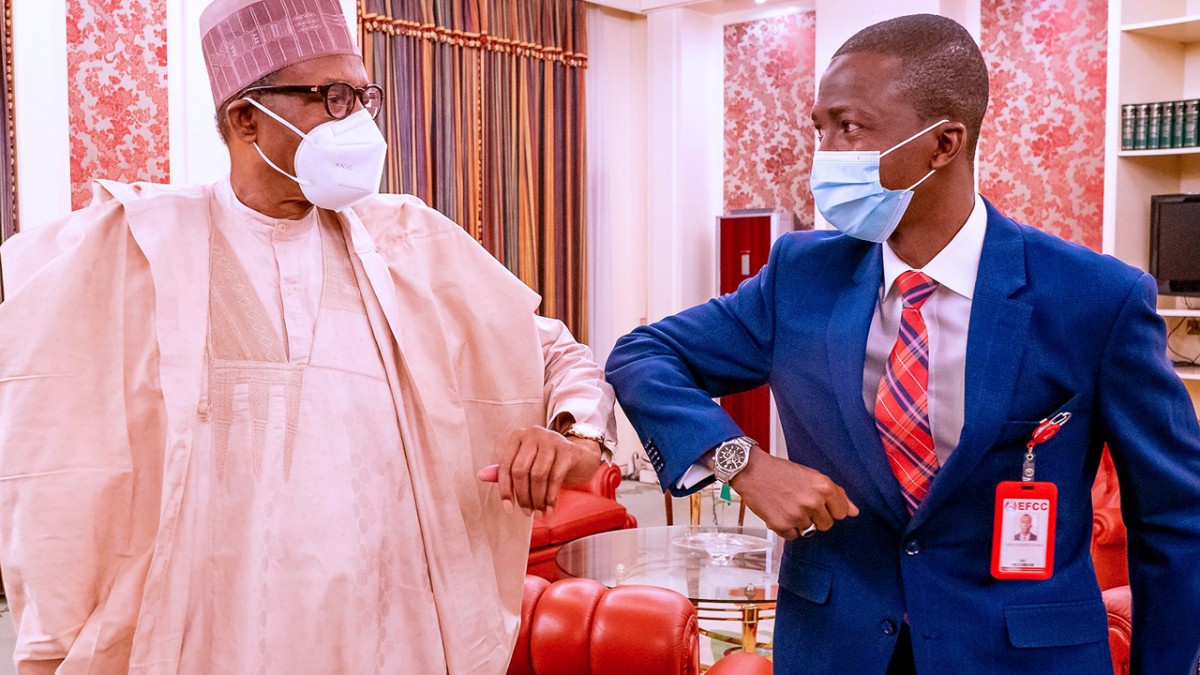 • He Should Bring Agency Up To Speed With International Standard, Expectations – HEDA
• EFCC Should Regain The Confidence Of External Partners – CISLAC, TI
• Avoid Mistakes Of Your Predecessors – Yakasai
• Justify Confidence Reposed In You By The Presidency – AYCF

With a flawed history of all its four previous heads being eased out of office unceremoniously because of corruption and sundry allegations, prominent anti-corruption groups and individuals, yesterday, served the new Economic and Financial Crimes Commission (EFCC) chairman, Abdulrasheed Bawa, a flurry of cautionary notes with emphsis on ending the ugly cycle of the hunter becoming the hunted.

In addition to urging him to make his youthfulness count by giving corruption a bloody nose the way it has never been done in the country before, the Human Environmental Development Agenda (HEDA), a non-governmental organisation and non-partisan human rights and development league wants Bawa to regain the confidence of the international partners of the commission.

While the Civil Society Legislative Advocacy Centre (CISLAC) and Transparency International Nigeria wants him to spare no efforts in ensuring that the commission is totally independent from political influence, they also implore him to deploy his youthful energy and knowledge to push for reforms and ensure a fair and balanced fight against corruption in the country.

Elder statesman, Tanko Yakasai on his part, cautioned Bawa against mismanaging recovered funds like some of his predecessors did, while the Chairman, Centre for Anti-corruption and Open Leadership (CACOL), Debo Adeniran, charges the new anti-corruption czar to be firm, and avoid unwholesome baits by corrupt elements, including politicians, whom he will come across in the cause of his new assignment.

He specifically warned him to steer clear of mouthwatering offers from those who are already under investigation, prosecution, or those who have the potential to commit financial crimes.

These admonitions came on the heels of Bawa handing over the leadership of the Lagos Zonal Office to Taufiq Sabir, ahead of taking the reins as the executive chairman of the commission.

Before the official handover ceremony, Bawa met with sectional/unit heads, as well as all officers of the zone to give them his last charge, just as he charged the new zonal head to keep the flag flying, while admonishing them to be disciplined in the discharge of their duties.

He said: “It is just natural, you can’t be fighting corruption, and doing something different yourself at the same time. You must be above board at all times, and strive to be better always.”

He vowed that under his chairmanship the EFCC will ensure a proactive approach to the fight against corruption. “Before the crime is committed, we are going to put in place measures that will help nip it in the bud, it’s going to be the way to go,” he said.

GIVING his perspective on why all former EFCC chairmen have left office in questionable circumstances, the chairman of HEDA, Olanrewaju Suraju, said: “The chairman of EFCC is unable to protect himself from the harassment of powerful politicians like the attorney general of the federation/minister of justice, and leaders of the parliament in the absence of security of tenure from the law; commitment of the president to a strong, virile, independent and effective agency; support of the media and civil society for the agency and its operations, and the non-removal of the chairman without the 2/3 majority approval of the Senate.”

Suraju, who also harped on the need for the chairman to transparently and accountably manage the agency and its recovered assets noted, “as a matter of fact, preventing the chairman’s controversial removal is synonymous with inactivity or compromise. The EFCC chairman and the agency must perform to get the trust, and support of stakeholders, and the resentment of corruption perpetrators and corrupt political officials.

“To record success and make sustainable impact at the commission, the new chairman should, as matter of urgency, embark on the following: rebuild the confidence, motivation and morale of staff members from recent interference of the AGF in the operations of the commission. He should also promote collective administration of the commission, and set the exit plan for senior police officers in the commission for progressive take over by senior cadets officers.

“Additionally, he should create, manage and regularly update the database of recovered assets and case management for the organisation, as well as ensure broad consultation with different local stakeholders (media, CSOs, sister agencies, religious institutions etc.,) on his agenda for the commission.

“The age of the new chairman is an advantage. He is an officer with limited responsibilities and allegiance to friends in the political space. He has minimal needs and less pressure to inform compromise of his office. As a young man, he is most likely to operate at the digital age and bring the agency up to speed with international standard and expectations,” he concluded.

CACOL chief Adeniran, who said that, “Nigerians do not have a choice than to welcome the new chairman of EFCC, even though the procedure that led to his appointment is faulty (to the extent that the president has not categorically dismissed, sacked, or removed the former acting chairman, Ibrahim Magu), added that there are important steps he must take to have a smooth flight.

“He should also ensure that the dichotomy between the police-trained personnel and the EFCC-trained personnel is removed because it could lead to a rebellion within the commission. He should normalise the working relationship, create synergy, be transparent, and accountable in his dealings and operations. He must ensure that investigations are thorough, while investigators should be protected and insured. He should not pander to the dictates of godfathers, especially the office of the minister of justice, because in most cases that is where the problem of the EFCC chairman begins. He should also avoid favouritism in the posting of officers so that they would have a sense of belonging.

“He should work in synergy with other anti-corruption and law enforcement agencies. He should also be firm when dealing with politicians. He should not allow nepotism to becloud his senses of judgment,” Adeniran said.

He also cautioned him against “disappointing the army of Nigerian youths that have been looking for younger persons to occupy position of responsibility. He should prove to them that he could do better than the old folks even though some of us believe that experience never runs out of fashion.”

The CACOL boss pointed out that Magu’s suspension still subsisting “means that the new chairman came in on a note of controversy. Also, the new chairman has been accused of so many wrongs, especially when he was in Port Harcourt. He needs to clear himself of these allegations otherwise he would carry the burden of the allegation throughout his tenure. We also expect him to declare his assets and make it public so that the public can follow up with whatever assets that he will accumulate while in office.

“Again, rumour is rife in town that he is a cousin of the current minister of justice and attorney general of the federation. This may lead to conflict of interest since the minister superintends over the supervisory ministry of the EFCC. That may lead to the chairman being converted to an errand boy, especially since all along there have been conflicts between justice minsters and chairmen of EFCC. The present minister of justice has a couple of allegations leveled against him by former acting chairman. He was accused of having underlining dealings with MTN over the fines imposed on MTN by the NCC among other allegations. If he wants to extricate himself, he should start his works by formally investigating these allegations against the minister and prosecute everybody that is culpable,” he submitted.

WITHOUT mincing words, Yakasai said Bawa “should learn, and not repeat the mistakes of his predecessors because I was shocked when I learnt of the amount of money that Ibrahim Magu was accused of mismanaging. I didn’t believe it. It was beyond common sense.

“The earlier people were policemen. They were not trained to do the work of the EFCC. Now this man was recruited and trained by the EFCC. So, he should know better than anybody borrowed from the Nigerian Police. He is well equipped to do the needful now.

Apparently optimistic that Bawa would excel, he said: “Talking about his age, it depends on your frame of mind. Go through the country’s record books and see what the likes of Tafawa Balewa; the Sardauna of Sokoto; Sir Michael Okpara etc. Look at their age and look at the wonders they performed even with their modest level of education at that time. They achieved a lot with meagre revenue; they built schools, roads and hospitals.”

AUWAL Ibrahim Musa (Rafsanjani), the Executive Director of CISLAC who made the group’s position known said “to avoid pitfalls that charaterised the tenure of previous EFCC chairmen, the new chairman should ensure that the commission is totally independent from political influence. This is a major challenge facing anti-graft and law enforcement agencies across the country and we at CISLAC/Transparency International (TI) hold the opinion that the insulation of the commission from vested interests is very fundamental in the fight against corruption.”

On what Bawa should focus on to succeed on the job, he said: “To succeed on the job, the new chairman should work on the cooperation and synergy between the EFCC and its sister anti-graft and law enforcement agencies. He should ensure that investigators and prosecutors from the commission do a thorough job before court filing. The EFCC should also increase its international cooperation with external partners especially in the areas of asset recovery and management. While doing this, the agency should also be very transparent in the management of assets it recovers.

“Finally, he should make efforts to ensure that the EFCC Establishment Act 2004 is amended to ensure an active and effective board to oversee the operations of the commission. If the above areas receive the required attention, the fight against corruption in Nigeria by the agency will be greatly improved.”

In a statement signed by the National President, AYCF, Alhaji Yerima Shettima, the group said the appointment of Bawa was an indication that time has come for “a shift from the old brigade to young turks, who have the productive energy to turn around the fortunes of this nation at critical point in our development history.”

The AYCF said as a youth group, it is not only happy with the integration of young people in key governance roles, but has confidence in “young, brilliant and experienced men and women in today’s Nigeria, just like Bawa.”

The group, however, called on the new EFCC boss “to justify the confidence reposed in him, not only by The Presidency, but also the Nigerian youth, who see him as one proof that young people can apply special skills to boost nation building.”

It also urged the EFCC boss to deal with the challenges of financial crimes across the nation, charge suspects to court, using strong evidence, and avoid trial by the media – as was case before now.”

The AYCF noted that President Buhari’s choice of an EFCC Chairman like Bawa was also an indication that Nigeria’s future would hopefully be bright, with the elderly playing mentoring and advisory roles, while youths spin the wheel of governance.

“We are fully prepared to protect him because he is one of our own, and we urge all Nigerian youths to rally around the EFCC boss with all their legitimate might.

“Our call for the EFCC boss is to go after all criminals and ensure that they get punished for their sins against the nation, regardless of how highly-placed they are, and from whichever part of the country. He should pursue justice within the ambit of the law. This is our simple prayer.”