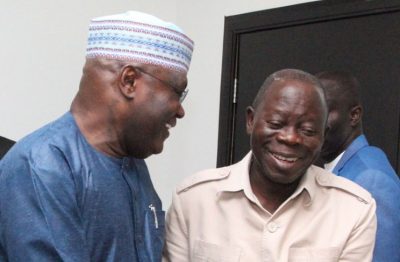 Oshiomhole spoke on Wednesday during an interview with Channels Television.

He said the leading presidential candidates are Atiku, Bola Tinubu of the All Progressives Congress (APC) and Peter Obi of the Labour Party (LP).

The former APC national chairperson said the main opposition – PDP – is a “house divided against itself” owing to the row between the party and five of its governors dubbed the ‘Integrity Group’.

He said Tinubu will win the 2023 presidential election because the five governors have done “some damage to the reputation” of Atiku.

“PDP is a house divided against itself and the real damage being done to the reputation of the PDP candidate, Atiku Abubakar, is that governors, not unknown quantities, who had never decamped from PDP, who could be called PDP indigenes, they have spoken to the fact that you cannot trust the PDP candidate, Atiku Abubakar, and therefore they withdrew from the campaign council,” Oshiomhole said.

“If five people have reasons to question the character of Atiku Abubakar that you can’t trust his words, that he can’t even manage his own party and can’t grant concessions, he is so fixated about certain things.

“He is totally insensitive to project Nigeria — the need to keep Nigeria together. It is not difficult to see why Atiku cannot win

“Atiku is battle weary, he has nothing new to say. He will sell everything. Once he said he will sell NNPC, people say that was the way he sold NITEL. What became of NITEL? It is just that at this point, it is hard for a man to say I throw in the towel in the middle of the game so he will rather patch it up. He is the weakest link right now among the three leading candidates.

“His governors said we can’t trust him, those who are leaders of his party, five of them, every agreement we made with him, he broke it, he is a serial betrayer of agreements. When he is seeking power as an applicant, he does not respect agreements, when he gets the job as a commander in chief of the armed forces what string do you have to pull?”

Nyesom Wike, governor of Rivers, Seyi Makinde of Oyo, Samuel Ortom of Benue, Okezie Ikpeazu of Abia, and Ifeanyi Ugwuanyi of Enugu are members of the ‘Integrity Group’ demanding concessions from Atiku. (The Cable)