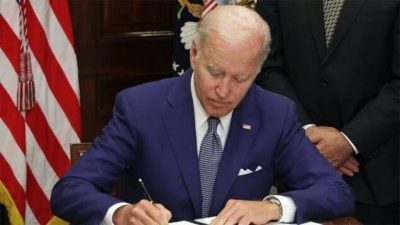 U.S. President Joe Biden signed Democrats’ landmark climate change and health care bill into law on Tuesday, delivering what he has called the “final piece” of his pared-down domestic agenda.

With the spending law, he aims to boost his party’s standing with voters less than three months before the midterm elections.

The legislation includes the most substantial federal investment in history to fight climate change — some $375 billion over the decade — and would cap prescription drug costs at $2,000 out-of-pocket annually for Medicare recipients.

It also would help an estimated 13 million Americans pay for health care insurance by extending subsidies provided during the coronavirus pandemic.

The measure is paid for by new taxes on large companies and stepped-up IRS enforcement of wealthy individuals and entities, with additional funds going to reduce the federal deficit.

In a triumphant signing event at the White House, Biden pointed to the law as proof that democracy — no matter how long or messy the process — can still deliver for voters in America as he road-tested a line he will likely repeat later this fall ahead of the midterms: “The American people won, and the special interests lost.”

“In this historic moment, Democrats sided with the American people, and every single Republican in the Congress sided with the special interests in this vote,” Biden said, repeatedly seizing on the contrast between his party and the GOP. “Every single one.”

The House on Friday approved the measure on a party-line 220-207 vote. It passed the Senate days earlier with Vice President Kamala Harris breaking a 50-50 tie in that chamber.

“In normal times, getting these bills done would be a huge achievement,” Senate Majority Leader Chuck Schumer, D-N.Y., said during the White House ceremony. “But to do it now, with only 50 Democratic votes in the Senate, over an intransigent Republican minority, is nothing short of amazing.”

Biden signed the bill into law during a small ceremony in the State Dining Room of the White House, sandwiched between his return from a six-day beachside vacation in South Carolina and his departure for his home in Wilmington, Delaware.

He plans to hold a larger “celebration” for the legislation on Sept. 6 once lawmakers return to Washington.

You are a courageous leader – Jonathan tells Babangida

Man chops off genitals while dreaming he was cutting meat