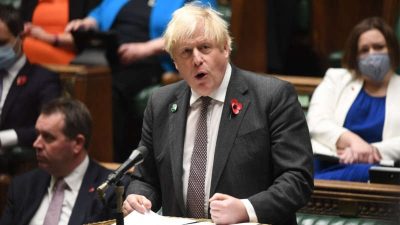 British Prime Minister Boris Johnson’s premiership was in the balance on Thursday as he faced calls from within his Conservative Party to resign.

The calls followed Johnson’s confession that he attended a party at his official residence during a coronavirus lockdown.

In a speech before parliament, Johnson tendered his “heartfelt apologies” for attending the gathering at Downing Street in May 2020.

He told parliament he understood the public’s rage at the revelations.

While some senior ministers rallied around to offer support to their leader, who won a landslide election victory in 2019, media reports said the backing of finance minister Rishi Sunak, regarded as a potential successor to Johnson, appeared lukewarm.

Others were more direct. The Conservatives’ leader in Scotland, along with a handful of other prominent lawmakers, called for Johnson to resign, saying his position was untenable.

“There is a lot of concern amongst my colleagues about the damage that these revelations are doing to the Conservative Party. But I think yesterday there was a bit of a turning point of opinion.”

Johnson admitted for the first time on Wednesday he had joined a gathering held in the garden of Downing Street on May 20, 2020, saying he had stayed for about 25 minutes to thank staff at what he thought was a work event. He said he regretted his action.

Media reports have said tables in the garden were set out for food and wine, while an invitation sent to around 100 people suggested taking advantage of the lovely weather. “Bring your own booze”, it said.

At the time, social contact was limited to a bare minimum and many people were furious that they had been unable to visit loved ones on their deathbeds or attend funerals.

In response to opponents’ demands for his resignation, Johnson said people needed to wait for the outcome of an internal investigation being carried out by senior civil servant Sue Gray, whose report is expected in the next two weeks.

The revelation about the party follows similar allegations about rule-breaking by Johnson and his officials earlier in May 2020 and during a Christmas lockdown at the end of that year.

A string of scandals including accusations of corruption and “sleaze”, or self-serving dishonesty, have angered the public and the government’s handling of COVID-19 and its awarding of contracts for protective equipment have been widely criticised.

A YouGov poll for the Times newspaper, carried out before Johnson’s apology, put the opposition Labour Party 10 percentage points ahead of the Conservatives, whose lead has evaporated.

The Conservative Party is notoriously ruthless in dispensing with leaders who are feared to damage their electoral chances, most recently forcing Theresa May from power after three years amid bitter internal squabbles over Brexit.

To trigger a leadership challenge, 54 of the 360 elected Conservative members of parliament (MPs) must write letters of no confidence to the chairman of the party’s “1922 Committee”, with a small number saying they had already penned such letters.

Many MPs are said to be waiting for the outcome of Gray’s report before taking any action, newspapers said, while May’s local council elections could also be crucial in determining whether Johnson will face an insurrection.