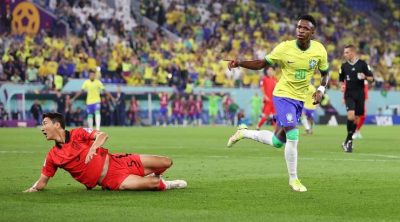 Brazil crushed South Korea 4-1 on Monday to reach the quarter-final of the ongoing World Cup in Qatar.

The South American side will play Croatia in the quarter-final.

Vinicius Junior opened scoring for Brazil in seven minutes into the match, firing the rebound into the top right corner after the ball broke to him in the box.

Neymar added Brazil’s second goal on 13th minute from the penalty spot. He ran up to the ball, stopped and waited for Seung-Gyu Kim to commit before slotting the penalty into the bottom right corner.

Richarlison made it 3-0 for the South American side on 29th minute. He took a short pass from Thiago Silva in his stride in the box, jink inside his man and unleashed an unstoppable shot into the bottom left corner.

Seven minutes later, Lucas Paqueta unleashed a first-time shot from inside the box and beat the goalkeeper into the bottom left corner.

South Korea reduced the tally on 76th minute. Seung-Ho Paik got to the ball and unleashed a strong shot from distance. It turned out to be a good decision as his effort found its way inside the right post.