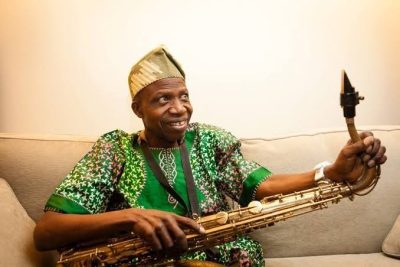 The ‘A dara, a dara’ singer, among many other acclaimed songs, died hours ago at the age of 79, Phenomenal Lagos said.

The passage was relayed by his widow, Latoya Aduke, through music promoter and Evergreen Music boss, Bimbo Esho.

Esho in an early Friday Facebook post said, “Bimbo, Daddy Has Passed On…This was the message I stumbled on waking up at exactly 3am to peruse my WhatsApp page. It was a message sent in to me by Orlando Julius beautiful and supportive wife Lady Latoya.

“Orlando Julius, a native of Ijebu Ijesha, succumbed to the cold hands of death and breathed his last few hours ago at the age of 79.

“We shall miss one of Nigeria’s fathers of Afro/Highlife Music, a gentleman and a fine saxophonist.

“May daddy Orlando Julius soul journey well. To the entire Ekemode family, may God give you the fortitude to bear this irreplaceable loss.”

Although the late musician had been slowed down by age some years before his death, his rich bank of songs continued to define his essence as a great multi-talented musician.

His big role in the industry got highlighted last year, when many stakeholders gathered in Ilesa, Osun State, to celebrate his 60 years on stage.

Orlando Julius related well with musicians of different countries and ages, as he was able to court even younger artistes that include Beautiful Nubia and Edaoto, at whose shows he occasionally performed.