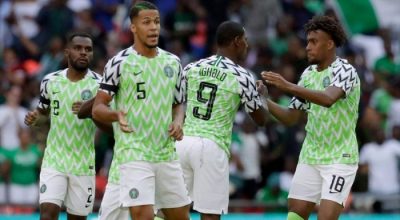 Tunisia knocked out Nigeria from the round of 16 stage of the African Cup of Nations (AFCON) tournament in Cameroon following a shock 1-0 victory thanks to a Youseff Msakni goal at the ROumde Adjia stadium in Garoua on Sunday.

In the fight of the Eagles, the Carthage Eagles, who came into this encounter with several players and their coach out due to COVID-19, emerged winners over the Super Eagles in a shock result.

It is the first time the Super Eagles will not reach the Quarter finals stage of AFCON since 1982, while Tunisia have advanced to the quarter finals in four consecutive tournaments.

Both sides were on the offensive from the start, Wilfred Ndidi saw an overhead kick bobbling just wide while Joe Aribo saw a shot deflected for a corner.

The initial rush subsided and chances were hard to come by with Tunisian players throwing themselves to the floor in search of fouls to stop the Super Eagles from stringing an attacking move together.

The North Africans had the last shot of the first half, Hamza Rafia curling well wide as Tunisia kept the score level at halftime.

Tunisia took the lead three minutes after the restart through Msakni, the forward’s tame shot took a slight deflection off William Troost-Ekong and goalkeeper Maduka Okoye could only divert into his net for a shock 1-0 lead.

Coach Austin Eguavoen rolled the dice with Alex Iwobi and Peter Olayinka entering the fray, but Iwobi was sent off three minutes after coming on for dangerous play, a VAR review changing his caution to a dismissal.

This spurred the West Africans into action, Moses Simon’s shot saved at the back post while Chukwueze was unable to find the target after a mazy run form Ola Aina. Simon, Ndidi and Sadiq Umar all dragged shots wide as the

Tunisia will face Burkina Faso in the Quarter finals.