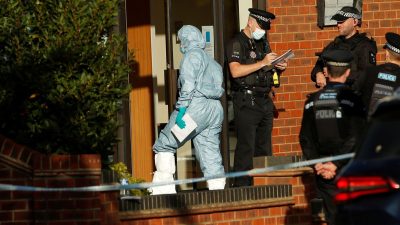 The fatal stabbing of Conservative MP Sir David Amess has been declared as a terrorist incident, police say.

Sir David, who represented Southend West in Essex, was stabbed on Friday afternoon during a surgery at Belfairs Methodist Church in Leigh-on-Sea.

Police officers and paramedics tried to save him but he died at the scene.

The Metropolitan Police said that the early investigation had revealed “a potential motivation linked to Islamist extremism”.

A 25-year-old man – understood to be a Briton with Somali heritage – was arrested on suspicion of murder.

He is in custody at an Essex police station.

Police said in the early hours of Saturday that they are not seeking anyone else in connection with Sir David’s death but inquiries are continuing.

Two properties were also being searched in London as part of the investigation, they added.

Earlier on Friday, the Duke and Duchess of Cambridge were among those to express “shock and sadness” following Sir David’s death.

The father-of-five had been an MP for 38 years, and while he never held a ministerial role, he was known as someone who took on the causes of his constituents.

He was socially conservative, an early Eurosceptic, and a campaigner for animal rights and against fuel poverty.

He also spent years raising awareness of endometriosis after being approached by a constituent who suffered from the painful condition.

The 69-year-old is the second MP killed in their own constituency in little more than five years, following the 2016 murder of Labour’s Jo Cox.

He told Sky News that he had gone ahead with his own constituency surgery on Friday, despite the news of Sir David’s death.