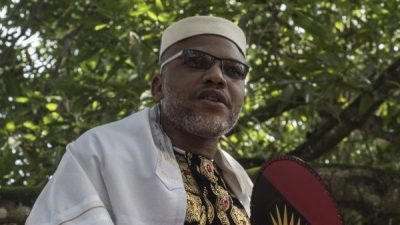 Ohanaeze Ndigbo Worldwide has warned Northern groups to stop disuniting the country over the leader of the Indigenous People of Biafra, Nnamdi Kanu.

The apex Igbo group spoke in a statement issued by its Secretary-General, Mazi Okechukwu Isiguzoro, on Wednesday.

It accused the Northern Elders Forum, Arewa Consultative Forum and Coalition of Northern Groups among others of fanning embers of disunity.

It said: “Ohanaeze Ndigbo Worldwide has warned the Northern leadership especially the Arewa Consultative Forum and the militant wing of the Northern Elders Forum, Coalition of Northern Groups, to desist from fanning the embers of dissension and disunity that is threatening the corporate existence of the country and allow President Muhammadu Buhari to do his job and got Nnamdi Kanu release.

“The unity of the country is superior to all arguments that ACF and CNG summed up why Buhari should allow Kanu to face his trial in court and possibly jail him if found guilty of the alleged charges against him before considering granting of Presidential Pardon and Amnesty to him,” it’s an absurdity of stupidity and nonsensical for the Northern leadership to resort to pettiness, in all issues concerning the southeast, especially when its in the best interests of the country and her survival, its prerogatives of the Presidency to either choose from actions that will lead to the disintegration of the country or retreat from the promotion of nepotism which was responsible for the actions of IPOB to respond to the areas of the inadequacies of the Federal Government especially in handling the activities of killer herdsmen in the South-East.

“Arewa Consultative Forum has stirred the hornets pot and, they will reap from the benefits of the disintegration of the country if IPOB becomes offensive shortly if Buhari decline in the request of Igbo leaders to secure Nnamdi Kanu’s release.

“Nigeria will be on flames and experience security challenges if Kanu is not released, it’s obvious that ACF has descended from her esteemed position of admiration to become overnight street urchins by permitting the terrorist activities of Boko and Bandits to becloud their sense of reasoning from seeing that only the release of Nnamdi Kanu will secure a stronger United Nigeria, their oppositions to the release of Ipob leader has automatically put ACF as an exponent of Nigeria’s breakup and disintegration.

“We are not begging President Buhari not to listen to the ACF but he should correct his lapses in governance before the International community.

“ACF and Northern Elders Forum are not aware of the International pressures on President Buhari after the Kenyan Government confirmed that the extradition of Nnamdi Kanu to Nigeria did not follow the established protocols and rules coupled with the release of Endsars reports which has battered the image of the country and his government.

“Buhari is not doing Ndigbo any favour over Kanu but is a must decision to save his government from the accusations of abuses of human rights violations and a clampdown on the critics of his government when the real terrorists are being pampered, Igbo leaders led by Pa Mbazulike Amaechi offered Buhari a soft landing to save Federal Government from further embarrassment before the International community.