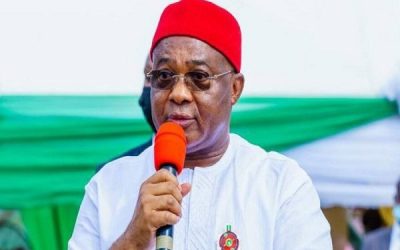 Security agencies may have nabbed one of the sponsors of the multiple attacks on security formations in Imo State, it was learnt on Monday.

The suspect, a businessman, was arrested the man last month, sources said.

He was said to have been one of the sponsors of the recent acts of violence in the state.

His motives are yet to be ascertained as he is still undergoing interrogation.

The middle-aged man, said to hail from Orsu Local Government Area, is in the custody of a security agency.

He was linked to the killings and burning of police stations in the state as well as the attack on the Owerri Correctional Centre.

On April 5, gunmen attacked the Imo police headquarters and the correctional centre in Owerri, setting 38 vehicles ablaze and freeing 1,844 inmates.

Many police stations have come under attack in the state, with many officers killed.

He, along with others, was said to have been under security surveillance following the attacks.

His arrest is yet to the confirmed officially, but security sources told our reporter that the businessman is in custody.

It was also gathered that the suspect was a director of a hotel in Imo and is also involved in a pharmaceutical business in Lagos.

A reliable security source told our reporter that over 12 hoodlums operating as “unknown gunmen” in the state have been apprehended.

One of the ring leaders is said to hail from Amakohia in Ihitte Uboma Local Government Area in Imo.

Imo Governor Hope Uzodimma has slammed some leaders for failing to condemn the spate of criminality in the country.

He is worried that they have rather chosen to engage in blame games.

The governor said that instead of political and religious leaders giving a party and ethnic colouration to criminality, they should rise in unison to condemn it as patriots.

“The genuine reaction of every well-meaning and patriotic leader should be that of outrage and condemnation against violent crimes before looking for whom to blame,” the governor said.

He spoke with reporters in Owerri, the state capital.

Uzodimma said it was worrisome that some leaders have continued to play the ostrich in the face of rising cases of crime.

According to him, by either keeping quiet or blaming either President Muhammadu Buhari or the All Progressives Congress (APC), these leaders create the impression that only the government and the ruling party fight crime.

He regretted that those who were politicising insecurity were unwittingly creating an enabling platform for division and buoying the criminals to exploit the differences among the political class.

He advised aggrieved politicians not to toe the line of violence and desist from any action that will heat up the polity or lead to loss of lives and property, for political gains.

The governor said it was unfortunate that even those who have access to the presidency have chosen the media to lambast the government instead of passing vital information to the government on ways to tackle insecurity.

Uzodimma, however, praised President Muhammadu Buhari for refusing to be distracted by the cacophony of blame, especially from opposition politicians.

He said by remaining focused on finding solutions to the current problems, the president has demonstrated uncommon leadership traits befitting his office.

He appealed to the political and religious leaders to moderate their utterances so as not to create the impression that criminality is the product of APC.

Uzodimma added that the fight against insecurity has to be a collective responsibility of both the government and the citizens.

The governor insisted that criminality has no political party and spares no one.

This, he said, makes it the duty of leaders to condemn it unequivocally and to proffer solutions.

He advised Nigerians to be involved in the fight against insurgency, banditry, kidnapping and other violent crime by sharing intelligence with security agencies. (The Nation)