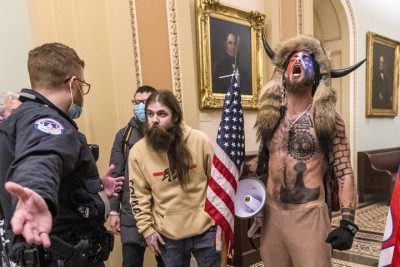 A prominent supporter of the baseless QAnon conspiracy has been sentenced to 41 months in prison for his involvement in the US Capitol riot.

Jacob Anthony Chansley was among the Trump supporters who tried to stop Congress from certifying the 2020 presidential election on 6 January.

He earlier pleaded guilty to one felony count of obstruction in an official proceeding.

His sentence is among the longest so far given in connection to the riots.
In addition to his prison sentence, Chansley was sentenced to 36 months of supervised release and must pay $100 (£74) in restitution.

The 34-year-old became one of the most recognisable figures from the siege after being pictured wearing horns and a bearskin headdress, with a US flag painted on his face. He referred to himself as “the QAnon Shaman”.

Followers of the QAnon conspiracy theory believe that former President Donald Trump was waging a secret war against a cabal of Satan-worshipping paedophiles in government, business and the media.

Following his arrest, Chansley told the FBI that he came to DC in January “at the request of the president” that all “patriots” come to the city.

In court on Wednesday, Chansley said he wants to “evolve” and was “wrong for entering the Capitol”. “I have no excuse,” he said.

He also said has been asking himself “what would Jesus do?” and likened himself to Indian independence leader Mahatma Gandhi, saying: “What if we all judge Gandhi based on that he beat his wife before his spiritual awakening?”

He has been in custody nearly 11 months since being arrested just days after the riot.
Photographs and videos taken during the riot show Chansley carrying a spear in the Capitol. Prosecutors also say he led other protesters in prayer at the dais – a raised platform – and left a note a note threatening former Vice-President Mike Pence.

“It’s only a matter of time,” the note read. “Justice is coming!”

Prosecutors had recommended a sentence of 51 months in prison, arguing that the government “cannot overstate the serious” of Chansley’s conduct.

“His consistent rhetoric before and after the event, and his apparent ability to carry out his intentions of violently removing the ‘traitors’ in our government, is clear from the evidence in this case,” prosecutors said.

Chansley now claims to have disavowed Mr Trump and QAnon.

In September, his attorney told the court that his client was “non-violent, peaceful and possessed of genuine mental health issues”.

His 41-month sentence is one of the longest so far doled out to 6 January rioters.

Another participant, former mixed martial artist Scott Fairlam, was also sentenced to 41 months in prison earlier in November for assaulting a police officer and obstructing an official proceeding. (BBC)