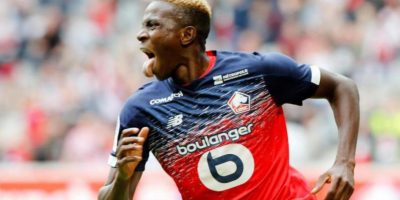 Ivory Coast and Chelsea legend Didier Drogba believes Nigeria forward Victor Osimhen can be the best in the world since he is a great striker. The Napoli attacker has been in great form for club and country. Last season, he scored 14 goals for Napoli in Serie A and provided two assists as the team finished in the Uefa Champions League places.

In the 2023 Afcon qualifiers, Osimhen has already scored five goals in two matches as the Super Eagles lead Group A with maximum points. Drogba insists the Nigeria striker has the talent and he just needs momentum to reach greater heights.

“I like him [Osimhen] a lot. Great striker. He can be the best in the world and when you have the talent like he has got, I think it’s just a question of momentum,” the 44-year-old former Blues player said in an interview with Marco Giordano. Osimhen has found the target on 28 occasions through two seasons at Napoli, with his stock continuing to rise as further potential is unlocked. Osimhen had long revealed he loves the Ivorian football legend and wanted to be like him while growing as a footballer on the streets of Lagos. “I like Drogba, but not just as a footballer, ” the Napoli star had told the Republica Newspaper.

“I like leaders and he was it on and off the pitch, where it counts the most. He has a personality that I admire, ” he said. Drogba scored 164 goals in 381 games for Chelsea and was a clutch player for the club in his heyday. He’s also the top scorer in the history of the Ivorian national team. He is said to be registering on recruitment radar across Europe, with plenty of big-spending sides in the Premier League keeping a close eye on his development. Arsenal have generated the most speculation there, but whether they will continue pursuing the striker is not yet known after approaching Manchester City over attacker Gabriel Jesus.

The Gunners have a £45 million ($55m) agreement in place for the Citizens striker. Manchester United have also been in the market for a striker and have been credited with an interest in Osimhen. The Nigerian star will not be easily prized from Napoli’s clutches, though, with reports suggesting that he has a €100m (£86m/$106m) price tag around his neck. Newcastle United are another Premier League side that have been linked with a move for the towering 23-yearold.