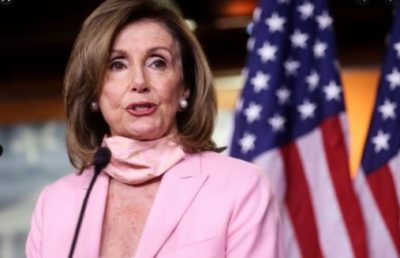 China’s foreign ministry announced sanctions against US House Speaker Nancy Pelosi on Friday following her visit to Taiwan this week which prompted outrage from Beijing.

The ministry said Ms Pelosi was “seriously interfering in China’s internal affairs and seriously undermining China’s sovereignty and territorial integrity” with the visit, and that China would “impose sanctions on Pelosi and her immediate family”, without giving further details.

Since Ms Pelosi left Taiwan this week, China has placed bans on importing dozens of goods from the island and launched major live-fire military drills that will last until mid-day Sunday.

Beijing has insisted its war games are a “necessary” response to Ms Pelosi’s visit, but Washington countered that China’s leaders had “chosen to overreact”.

Ms Pelosi and US officials have repeatedly claimed that her visit to Taiwan does not undermine Washington’s “One China” policy. Beijing condemned the trip as a threat to stability in the Taiwan Strait.

The state-run Xinhua news agency said the Chinese military “flew more than 100 warplanes including fighters and bombers” during the exercises, as well as “over 10 destroyers and frigates”.