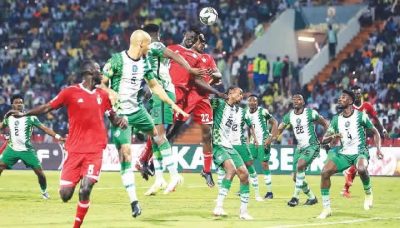 Nigeria’s biggest chance of making it two wins from two games from their Group D at the ongoing Africa Cup of Nations was always against Sudan and the three-time Africa champions didn’t disappoint as they dispatched the North Africans 3-1 to confirm their place in the knockout stages on Saturday.

First-half goals from Samuel Chukwueze and Taiwo Awoniyi put the Super Eagles on the way, before Moses Simon added a third after the break.

Chukwueze opened the scoring in the third minute of the game, coolly finishing a fine assist from Simon.

With just a few seconds to the end of the first half, Awoniyi was rewarded for his efforts and work rate as he luckily deflected in a rebound from Iheanacho’s free-kick.

Flying in fine colours, the Eagles resumed the second half of the game the same way they ended the first 45 minutes as they refused to pull their legs off the pedal.

A lively Simon lobbed the ball past a Sudanese defender and was the quickest to catch up with the ball, shooting past the onrushing Ali Abu-Eshrein, in goal for Sudan, to make it 3-0 for the three-time African champions.

A clumsy challenge by Ola Aina in the 69th minute saw the referee, Victor Gomes, from South Africa award a penalty to the Falcons of Jediane.

The goal was no more than a consolation as the Eagles held on for the remainder of the game to qualify for the round of 16 of the AFCON tournament.

The victory, coupled with the 1-0 win over Mohammed Salah’s Egypt in their opening game, means Nigeria have now won their opening two matches at two consecutive Cup of Nations tournaments for the first time ever.

Tinubu’ll carve his name in gold if he supports South-East for 2023 presidency – Okechukwu, APC chieftain