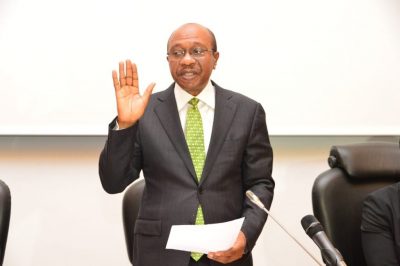 The Conference of Nigerian Political Parties has faulted the call by the Peoples Democratic Party seeking the resignation of the Governor of Central Bank of Nigeria, Mr. Godwin Emefiele.

The group stated this in a statement titled, “CNPP, political parties disown PDP over call for Emefiele’s sack,” and made available to journalists in Abuja on Thursday.

The Secretary General of the CNPP, Willie Ezeugwu, who signed the statement, argued that the CBN Governor had not done anything to warrant the call for his resignation.

He said that the “PDP does not enjoy the support of other opposition political parties in this call.”

He said what should be of concern to the PDP at the moment was why its top and leading members are resigning in large numbers.

The CNPP argued that the mass resignation in the PDP was due to the unattractive nature of the party on the watch of the current National Working Committee.

It cautioned the main opposition party to “stop chasing shadows when its house is consumed by an inferno.”

Part of the statement reads, “The Nigerian opposition parties are currently supposed to be undergoing internal healing and rebuilding so as to be well positioned to take over power in 2023.

“However, the activities of the Uche Secondus-led PDP has reduced the politics of opposition to child’s play and possibly being for hire to operators of Bureau De Change who are fighting the Governor of CBN for the policy to stop sale of Forex to the BDC’s.

“PDP has become a shadow of itself and fast turning into a briefcase political party.”

Also, the Oduduwa Youth Assembly had, in a statement on Thursday, asked the PDP to leave the CBN Governor alone and face the challenge of restructuring its National Working Committee by holding a successful national convention.

The Publicity Secretary of the group, Oladele John, in the statement, “wondered why the PDP should ask a hardworking man to resign now that the economic indices in the last five months has shown tremendous improvement.”

In another development, the PDP Youth Movement Support Group in a statement by its National Coordinator, Abubakar Sadiq, on Wednesday in Abuja, advised the CWC of the party not to get involved in the crisis between the BDC and the forex policy of the CBN.  (Punch)