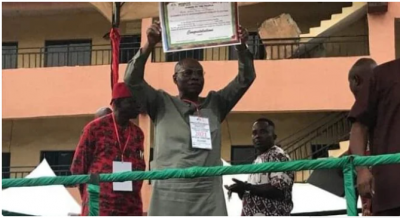 This is coming a few hours after Hyeladzira Nganjiwa, judge of a federal high court judge in Awka, ordered the Independent National Electoral Commission (INEC) to publish the name of Valentine Ozigbo as candidate of the Peoples Democratic Party (PDP) for the same election.

INEC had excluded the PDP from the list of cleared candidates, which was released on July 16.

The electoral body said its decision not to list the name of any PDP candidate was in recognition of court orders served in relation to the primary election of the party.

Ozigbo and Uba had emerged as the PDP’s governorship candidates from parallel primary elections.

Ozigbo subsequently filed an ex parte application on July 14, asking the court to recognise him as the authentic governorship candidate of the party.

No hiding place as Marwa unleashes crack officials on…

Second Niger Bridge to be commissioned in December

The presiding judge refused to grant Ozigbo’s prayer, but instead issued an order of accelerated hearing of the suit.

On the other hand, Uba had approached the court in suit number A/230/2021 to determine if the primary election conducted by the national executive of the PDP at the Dora Akunyili Women’s Development Centre on June 26 was done according to the law.

He asked the court to determine whether an Abuja high court order, on a suit by one Samuel Anyakorah against PDP,  bordering on validity of the process that produced Ndubuisi Nwobu, the party’s factional state chairman, had been set aside or stayed.

He also prayed the court to determine if the process of the primary, which produced Ozigbo through ‘super delegates’, was in line with the provisions of the electoral act, which states that primary elections would be done through delegates’ congress.

In his ruling, Nwabunike said the court order, which restrained PDP from conducting the primary election, had neither been stayed nor set aside.

He said that PDP erred by not clearing every legal huddle before the primary election, hence the process was in defiance of the law.

The court, therefore, resolved that the primary, which produced Uba at the Paul University’s complex on June 26 was lawful and in accordance with the electoral guidelines.

The judge also awarded N10 million in Uba’s favour as cost of litigation. (The Cable)