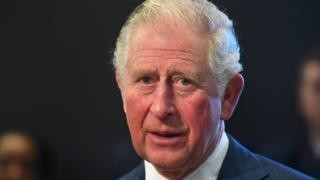 The Prince of Wales is now out of self-isolation, following his diagnosis of coronavirus.
Prince Charles, 71, spent seven days self-isolating in Scotland after testing positive and displaying mild symptoms.
The Duchess of Cornwall, 72, was tested and did not have the virus, but will self-isolate until the end of the week.
A Palace official said the prince was in good health and was following the government’s restrictions.
“Clarence House has confirmed today that, having consulted with his doctor, the Prince of Wales is now out of self-isolation,” a spokesman said.
Prince Charles spent his seven days of quarantine at his Birkhall home on the royal Balmoral estate.
According to government guidelines, anyone with symptoms should self-isolate for seven days, while everyone living in their household should self-isolate for two weeks.
In early March, before the government brought in social distancing restrictions, Prince Charles was seen avoiding handshakes at an event
Buckingham Palace previously said the Queen last saw her son, the heir to the throne, on 12 March, and was “in good health”.
It comes as 159 more people have died with the virus in England, as well as a further six people in Scotland, 14 in Wales and one in Northern Ireland.
The total number of people who have died with the virus in the UK had reached 1,228 in the latest UK-wide update on Sunday, before the announcement of the latest deaths.
Among those to have died is Amged El-Hawrani, a 55-year-old ear, nose and throat consultant at Queen’s Hospital Burton. Last week, an organ transplant consultant died after testing positive for the virus.

Some 20,000 former NHS staff have returned to work to help deal with the coronavirus outbreak, Prime Minister Boris Johnson has said, adding the country would get through the crisis “together”.
Around one in four doctors are off work at the moment either with symptoms or isolating because family members have symptoms, the head of the Royal College of Physicians estimated. (BBC)

Pakistan province to block phones of the unvaccinated