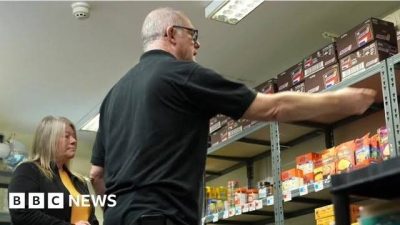 People are having to eat pet food while others try to heat food on a radiator, a community worker with 20 years’ experience has said.

BBC Wales analysis of new Census data suggests six of Wales’ most deprived communities are in the city.

A charity warns that struggling households do not just appear in areas long associated with poverty and policy needs to focus on people not places.

Trowbridge lies in what Mr Seed calls an “arc of poverty” from east to west of the Welsh capital, with issues endemic in his area.

“I’m still shocked by the fact that we have people who are eating pet food,” he said.

“[There are] people who are trying to heat their food on a radiator or a candle.

“These are shocking kind of stories that are actually the truth.”

“Cardiff is a flourishing city however there are pockets of deprivation which are simply not acceptable.”

Deprivation drops, rise in foreign-born people
Action urged to save lives in Wales this winter
Cost of living impact like Covid – health boss
Mr Seed said people were not being paid enough to afford the essentials, with the cost of living crisis pushing prices way up “so that everybody is squeezed or they just can’t afford it”.

Mark Seed said The Pantry usually has 30 families a week, each paying £5 for a basket of food
The Pantry offers good quality food at very low prices to more than 160 members.

One of them is Elizabeth Williams, 54, who says the project “makes a lot of difference” and brings people together but times were still hard.

“I usually go without to try to make things better in my house,” she said.

She and her partner are not working, while her son lives with them and works long hours.

“Even with my son working – and he contributes as well – it’s difficult because he has to live as well and he’s got needs. He has got several things wrong [with him] and he’s waiting for surgery.”

What do recent figures tell us about poorer parts of Wales?

The latest Census results suggest that as a whole, Wales has seen an improvement in deprivation in the last 10 years.

But more than half of households (54.1%) still fall into one of the categories used to measure it, either through being out of a job or long term sick, having poor health or a disability, low level of education or living in an overcrowded or poorly heated home.

When you drill down further into Census figures for local neighbourhoods, we can see those places with most households falling into all four categories.

They are dominated by urban communities – with six of the top 10 in Wales in Cardiff.

The list is topped by Mr Seed’s community – Trowbridge and a part of Rumney in the north of the city – with 29 households there classed as deprived in all four categories. This puts it within the worst 1% of more than 7,000 similar-sized communities across England and Wales.

Taken alongside the adjoining part of Trowbridge and St Mellons, these neighbourhoods have more households hitting all four deprivation indicators than the whole of Monmouthshire.

Separate recent figures at a very local level, this time from the Welsh government, reveal which communities have the highest proportion of children who are eligible for free school meals.

This has long been a measure for the numbers of families from poorer economic backgrounds, and who could be more vulnerable to the cost of living crisis.

We can plot most of the whole of Wales on a map: communities which appear in dark red have the highest proportions of children who qualify.

Cardiff features prominently again, this time topped by East Moors near Splott – but with three neighbourhoods on the Ely estate also ranked in the top 10, with two thirds of school-age children living there eligible for free meals.

When you zoom out to look at deprivation figures at wider county levels, they tell a story we are more familiar with.

Cardiff appears lower down in the table.

The Welsh capital still has nearly half of its households living with no obvious deprivation at all but they are living close to more than 400 households across 47 different neighbourhoods, which fall into the highest measures of deprivation.

Dr Victoria Winckler, director of the Bevan Foundation, says there are quite significant areas of Cardiff where people aren’t doing so well.
For decades west Wales and the valleys received extra funds from the EU because they were among the poorest parts of Europe but Cardiff was not included because in terms of average standards of living in the capital it was not deprived.

Dr Victoria Winckler leads the Welsh anti-poverty charity The Bevan Foundation and warns of the dangers of stereotyping large areas or cities as deprived or prosperous.

“The stereotype is that Cardiff is prosperous and the Valleys are poor and these figures shows that absolutely is not the case,” she said.

“You’ve got pockets of Cardiff that are prosperous, yes but also quite significant areas of Cardiff where people aren’t doing so well.

“It matters because the stereotypes or the broad-brush figures shape what governments and local authorities do.

“So it means that where help might be needed in parts of Cardiff they’re not getting it and it also means the opposite that there are opportunities in the Valleys that aren’t perhaps being exploited because people think that the potential isn’t there.

“There are people who are struggling because they don’t have good educational qualifications or good health and they live everywhere.”

In Trowbridge, Elizabeth Williams, who has lived in the area for 28 years, said she hears all the time of families, working but going without to give their children what they need.

“It’s heart-breaking sometimes because some of them are worse off than others but they’ve got to do it to keep them and their children sane,” she says. “You have to carry on, keep going, that’s what I feel at the moment.”

Hayat Mohamed, who is originally from Sudan is a Pantry volunteer. She only moved to Trowbridge in September but said what she found was “shocking”.

“The economic change, what is happening, what is going on in the whole world…. the world is changing now. All people are suffering.”

“Buildings go up, the economy flourishes and firms move here – but there’s a gap and we’re trying to close it.”

Trowbridge is in the east of Cardiff