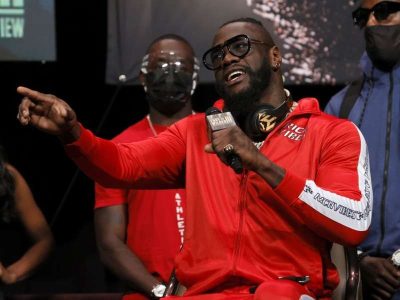 And the duo will meet again, this time in Saudi Arabia on August 20.

“I’m going with Usyk. I think a lot of people are.

After the first fight last year, Wilder was asked if he was surprised by the result and he told BT Sport: “I wasn’t at all, I wasn’t at all.

“Malik Scott always talks about Usyk and how skilful he is. Especially coming up from cruiserweight.

“He definitely had his struggles in the heavyweight division with Chazz Witherspoon and Derek Chisora. But styles make fights and with Joshua, he just had his number at that point in time.”

And backing Wilder’s thought is current WBC champion Tyson Fury when asked for his thoughts on the rematch.

“Joshua can obviously land a big punch, but I just think that Usyk’s too cute for him,” he told Gareth A Davies.

“Too smart, too quick, and a southpaw.

“And I think that [new coach] Robert Garcia trying to train him to be on the front foot or whatever and be aggressive will only enable Usyk to land more often.

“I just don’t see it, but then again, what do I know? Nothing about boxing. I’m heavyweight champion of the world, undefeated all of that stuff.

“Anyone can win a fight as we’ve seen many, many times and it’s a good time to beat Usyk now isn’t it?

“Because [his country] have been at war. Everything’s up in the air. If ever he was ever gonna be off his ball, now would be the time.

“But I just think Usyk’s too good of a boxer for AJ and I don’t think AJ’s got the ability to pressurise him for 12 rounds, drag him into a dog fight and knock him out.

“You have to be an elite special human being for that and I don’t think Joshua possesses that will to win to do that.

“If you’re willingly setting for second, say no more.”