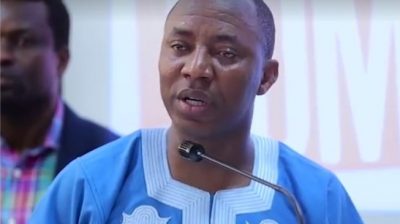 The presidential candidate of the African Action Congress, Omoyele Sowore, has revealed that the Department of State Services denied him access to the leader of the Indigenous Peoples of Biafra, Nnamdi Kanu.

Sowore, who shared a video on his Twitter handle on Thursday, said that he had waited for hours before being told that the time for visitation was over.

He captioned the video, “I traveled to the headquarters of the DSS today upon invitation of unjustly detained IPOB leader, Nnamdi Kanu, but after waiting for several hours the DSS people told me I can’t see him because “time for visitation has closed.”