Edo 2020: Obaseki seeks Buhari’s nod to contest on another platform, promises to return to APC 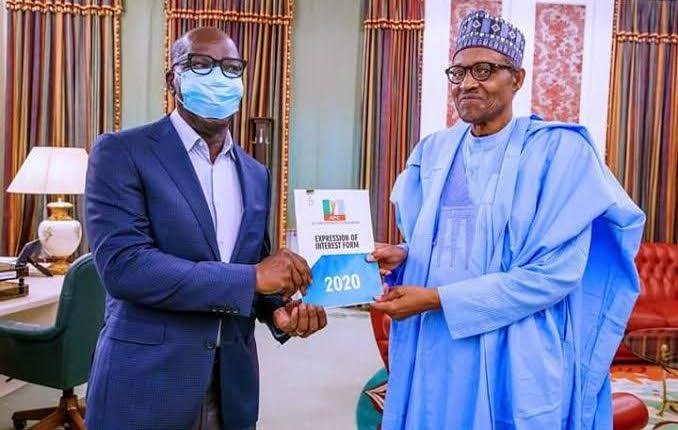 The embattled Governor of Edo State, Godwin Obaseki, is finalizing plans to decamp to another party following his disqualification by the Screening Committee of the All Progressives Congress (APC) over discrepancies in his academic certificates.

According to sources well wired in his camp, the Governor has been making furious calls to Abuja,pleading for an opportunity to propose an idea that would see him contest on the platform of the Peoples Democratic Party or the Aanother party but return to the APC if backed by the Presidency in the polls.

However, it is unlikely that the Presidency would agree to such plans. The APC, a party to which the President belongs, has lined up aspirants considered more popular in the state than the embattled Obaseki, a fact that was reaffirmed yesterday after jubilation broke out in the state with the announcement of the governor’s disqualification.

More so, nurturing such deal makes the candidacy of Obaseki problematic for any party willing to offer him its ticket – particularly a major one like the PDP – given that he intends to merely use it as a placeholder to contest the election before switching back to the APC should he manage to secure victory.

No plot to remove Abdullahi Adamu as national chairman…

When contacted about the possible scenario, members of the APC expressed confidence that the embattled Governor is free to pursue his ambition on whichever platform suits him as, according to them, he is an unpopular and drowning politician set for an embarrassing defeat at the polls.

The members recalled his lackluster administration and the failure to deliver on critical promises including the creation of 200,000 jobs to the people of Edo State.

“Even in defeat, Obaseki continues on his path of treachery, deceit, and dishonesty. He is plotting to trick a party into offering them his platform while also holding talks with Abuja, asking for support on the condition that he will return to the APC if helped to victory. If any party ignores this obvious warning signs and still offer him their platform, then that is on them. As for us in the APC, we have already moved on from him and our main focus now is conducting our primaries and preparing for the election proper,” one of the APC members said.

Another PDP stalwart and former Minister, Femi Fani-Kayode, who reacted to Obaseki’s disqualification and next political step berated the governor for his lack of loyalty while disclosing that he never stood a chance against Adams Oshiomhole, his benefactor and APC’s National Chairman whom Obaseki betrayed.

“One of the most important virtues in life is LOYALTY. Never bite the finger that fed you. Obaseki has learnt this lesson the hard way. I have known Oshiomhole for years. He is a formidable adversary, a skillful fighter and a tough cookie. Obaseki could have never outmaneuvered him,” Femi Fani-Kayode said in a tweet.

Edo 2020: Obaseki seeks Buhari’s nod to contest on another platformpromises to return to APC
0
Share FacebookTwitterGoogle+ReddItWhatsAppEmail

RAPE: Oluwo of Iwo to arm women with pepper sprays

PDP crisis: Pressure mounts on Ayu to step aside as old…

My Only Agenda Is To Serve Nigerians — Atiku