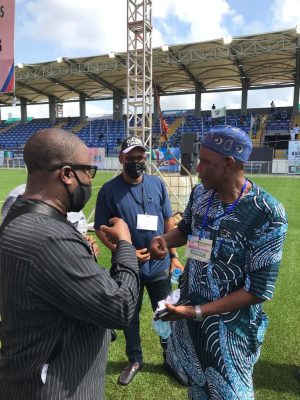 _… *Inec, Party Leaders Describe The Congress as Peaceful and Credible*_

The Special Adviser to the Lagos State governor on DAWN Commission Matters, who Served as Chairman, APC Lagos State Congress Planning Committee, Engr. Adekunle Olayinka, on Saturday, October 16, 2021 along with other members of the committee appreciated God Almighty for the successful conduct of the congress which has been described as one of the best in the country in recent times.

Hon. Olayinka, who is known for his humility and respect for order made sure that self and parochial interests were not allowed to becloud his good sense of judgement as he ensured the conduct of a rancour free and most successful state congress that will for a long time remain a positive reference point for posterity.

Also elected were 35 other members of the state executive of the party in a peaceful, democratic and transparent manner.

The Lagos State Congress was conducted by the 7 Member Committee from Abuja.The seven man committee was ably led by Mr Adebayo Adelabu.

The Independent National Electoral Commission (INEC) monitored as well as endorsed the final outcome having adjudged it very orderly, peaceful and credible.

Recalled that Hon. Olayinka was elected as the National Delegate of the party for Ifako Ijaiye Federal Constituency in the recently concluded LG Congress in Lagos State.