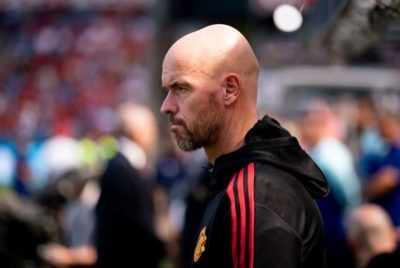 Erik ten Hag has been pleading with Manchester United’s board to bring in new players before the transfer window closes in just over two weeks’ time, according to reports.

The Red Devils have fallen to the bottom of the Premier League table for the first time 30 years after back-to-back losses against Brighton and Brentford – with the 4-0 defeat against the latter particularly humiliating.

Ten Hag has become the first United manager in over 100 years to lose his first two matches in charge and reacted by cancelling his players’ scheduled day off and hauling them in for more training on Sunday.

But there is clearly only so much he can do with the players currently at his disposal and, according to The Times, he has been urging United’s hierarchy to ramp up their efforts in the transfer market.

A deal for Barcelona’s Frenkie de Jong still appears to be up in the air, with the Dutchman having reservations about swapping Camp Nou for Old Trafford – particularly while he is still owed around £14million in deferred wages.

Juventus midfielder Adrien Rabiot has been identified as an alternative, but talks with the Frenchman’s mother – who is also his agent – are taking a long time.

So far, Ten Had has only brought in three new players: centre-back Lisandro Martinez – who was massively criticised for his display against Brentford – as well as backup left-back Tyrell Malacia and free agent Christian Eriksen.

Ten Hag also wants to bring in a new frontman but has been repeatedly frustrated in his efforts to bolster his attack, with a surprise move for Marko Arnautovic collapsing amid a backlash from supporters.

Atletico Madrid striker Alavaro Morata is the latest name in the frame to move to Old Trafford, a player who was first linked with a move to the club around the same time they signed Romelu Lukaku.

United are also looking at PSV’s Cody Gakpo, though the Eredivisie side will not allow the versatile forward to leave until they have taken part in their Champions League qualifier against Rangers – meaning Ten Hag will have to wait until next week at least.

Ten Hag publicly stressed the need to bring in new faces after the defeat to Brentford, saying: ‘We need new players. We need quality players. We are working on that and we’ll do everything to convince them to come.’

He had been expecting a raft of new additions but has not received the backing he had been promised so far, while interim boss Ralf Rangnick previously suggested the club needed as many as 10 new signings.

Despite De Jong’s reluctance to leave Barca and the complications that surround the deal, Ten Hag is believed to want to keep trying right up until the window closes.

In addition to new signings, United are also looking to offload a number of players with Ethan Laird joining QPR on loan, Hannibal Mejbri wanted by several Championship clubs and James Garner up for sale for a fee in the region of £15m.

Nigerian governors are the biggest problem in the country – Peter Esele