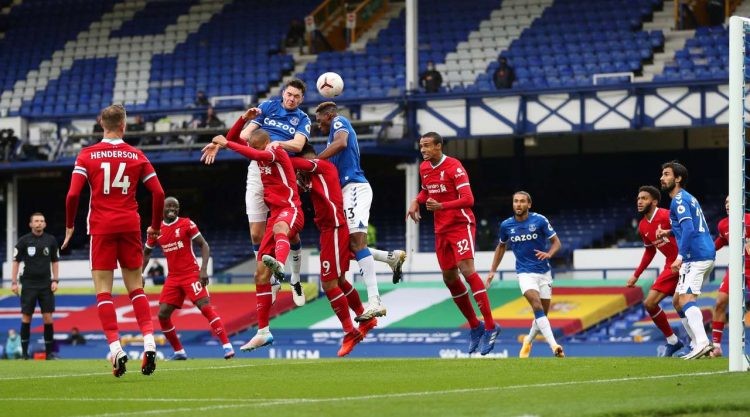 Everton held defending champions, Liverpool to a 2-2 draw at home on Saturday to hold on to the top position in English Premier league after five games.

The derby game lived up to expectation.

Sadio Mane who just returned from 14-day spell of treating Coronavirus, put the Reds in front in just three minutes.

Andrew Robertson fed the ball through to Sadio Mane, who picked up the pass inside the box and quickly sent it into the top left corner.

Everton fought back and got an equaliser on 19th minute through Michael Keane, who jumped highest inside the box to meet the resulting corner from James Rodriguez. His well-placed header ended up in the top of the net, leaving the goalkeeper flapping in the wind.

Liverpool restore their lead in the 72nd minute of the match through Mohamed Salah. He showed good composure inside the box to fire a first-time shot inside the left post.

The home side equalised again on 81st minute through Dominic Calvert-Lewin.

Lucas Digne showcased his great technique and produced a beautiful lofted cross into the box. Calvert-Lewin got onto the scoresheet by heading inside the left post.

On added time, Everton’s Richarlison was shown a red card by the referee for chasing his opponent and bringing him down with a very nasty tackle.

Liverpool looked to have snatched victory on added time when Jordan Henderson buried the ball in the back of the net, but VAR said it was no goal.