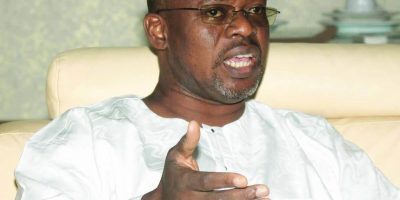 A statement signed by Mr Yemi Arokodare, the Director-General of the Organisation, on Thursday in Ado-Ekiti, alleged that members of the organisation were disenchanted by the process.

Gov. Emmanuel Udom of Akwa-Ibom who presided over the election, declared Mr Bisi Kolawole, an anointed candidate of former Gov. Ayodele Fayose, as the winner of the election, having polled 671 votes to beat Oni, his closest rival, who scored 330 votes.

Arokodare alleged that the delegates’ register was mutilated and many delegates’ names were missing from the register.

According to him, 32 automatic delegates who were accredited were not given tags and were not allowed to vote.

Arokodare said Gov. Udom also allegedly threatened to arrest and lock all of these delegates if any of them should come into the hall.

The Oni campaign accused Gov. Udom of allowing former Gov. Ayo Fayose, who heads a faction of Ekiti State PDP, to sit in the hall even after he had voted, a situation which is against the rules earlier pronounced by Gov. Udom.

According to him, Gov. Udom allowed aides of Mr Fayose to sit in the hall purposely to intimidate other delegates.

Arokodare alleged further that Ayo Fayose was the chairman of Gov. Udom election committee in Akwa Ibom and that the Jan. 26 PDP primary election was a payback for Ayo Fayose.

He concluded that the primary was not free and fair.

Arokodare said the Campaign Organisation, in view of the development, is in the process of reviewing the activities of the national leadership of the PDP towards managing the party to a success in the coming June 18 Governorship Election in Ekiti State.