Fashola and the Shadow Boxers 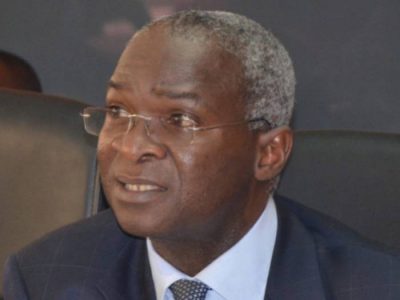 It has been an interesting week, reading commentary around the ‘This Day’ interview with the Minister of Works and Housing, Mr Babatunde Fashola.

Of course, it was easy to tell that many will not read, as it had become evident from the highlights that the facts laid out do not agree with their preferred narrative, removing the legs off some tired talking points.

Some would pretend not to have read, even when they had, maintaining silence, which is quite dignifying.

But then, there are those who have either not read or have read the interview upside down, yet running with the assumption of understanding, which they do not have. Strange as it is, these ones are often the most vociferous.

What I have found most interesting, however, is that in most of the gatherings, perhaps out of frustration at their inability to land a decent jab in response to the issues or facts Fashola had raised, opponents were only able to take to hitting below the belt. They would leave the head, taking on the legs, like punch-drunk boxers.

Fashola is this, Fashola is that. Fashola is overrated. Apparently, there is something about him being a Senior Advocate that really gets to them. They will leave the substantive issue and take on shadow boxing.

Well, in a way, it is understandable. Fashola is so methodical. He neutralises any possible counter-punch with his jab, and now challenges the opponent for a response he knows he would never be able to muster.

That exactly is what has been playing out with the interview. Opponents, feet wobbling like those of the foul-mouthed Lagos motorpark tout, taking to shadow boxing, when cornered. Like their counterparts on the streets, they easily take to insults when all they need to do is to simply lay out facts that counter those laid out by the Minister.

But how will they succeed with that, given that there is such widespread procedural illiteracy, ignorance of facts and recent history, which a dispassionate reading of the interview would have cured, if allowed.

Someone, calling out Fashola over his statement that the Presidency is not as ‘powerful’ as often made out, given that most of the things that directly touch the people are under the purview of the State (which owns land) and local governments, did so on the basis of his understanding that the Nigerian President is vested with the power of providing money from the national treasury to States and Local Governments.

He simply did not understand how things work, yet between him and friends, Fashola, who they said was only being clever by half, had been called all sorts of names.

Little did they know the joke was on them. I had to take to explaining the difference between the Federation Account and that of the Federal Government to them, as they obviously did not know.

The President does not have a right or supervisory role over what is due to the other tiers or what use they put that to. That was reinforced by the Supreme Court judgement in the Lagos State v FG, occasioned by President Obasanjo illegally withholding funds due to local governments in Lagos. Your misunderstanding of the law and confusion between the federation account and that of the Federal Government must have led you into error. Mr Fashola is right, especially in the context which he spoke”.

On many of the other issues raised, it is largely the same. Lack of grasp of the issues coupled with inadequate preparation. Featherweights, thinking foul talk and aiming for the feet is what they need to take on an heavyweight.

It is not that Mr Fashola cannot get it wrong. He has been wrong on occasions. Let us see where he got it wrong now. Even he will admit it, if you land a good jab. It is just that you need to do your homework well before taking him on. Lessons from those Home Economics Professors can only take you so far. The philosophy of ara ija leyin might work at the Osodi park of old, not sure it will suffice in this instance.

Let your facts speak. Let your jabs do the talking. Leave the legs. Enough of the shadow boxing. They won’t fetch you points.

Ndigbo on the verge of self-inflicted destructions

#EndSARS and the Weaponisation of Fake News

Kano Naval Base: Where critics got it wrong