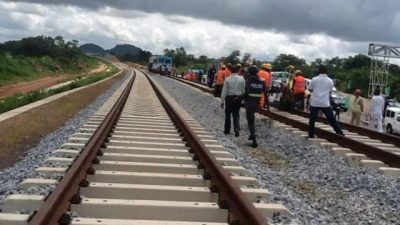 The service is expected to make movement of high volumes of containerised cargoes like steel, agricultural produce, oil and other goods easy.

It is also expected to reduce the stress witnessed on roads and in turn, prolong the lifespan of most roads in the country.

The Minister of Transportation, Rotimi Amaechi, also said the service would boost the Gross Domestic Product (GDP), of the country as well as improve the power supply.

Speaking during the flag-off ceremony in Ujevwu rail station in Delta state, Amaechi said: “We are here today, to flag-off commercial freight services on the standard gauge route that was abandoned for over thirty (30) years but rehabilitated by this Administration and put into operation.

“This laudable achievement will definitely boost the Gross Domestic Product (GDP) and equally enhance the socio-economic development of the communities living along the route.

‘’The project is for the benefit of these communities and Nigeria generally, irrespective of political affiliation.”

He also reiterated the Federal Government’s intention to link every part of the country via rail.

He said: “The modernsation of railway in Nigeria is not confined or restricted to any geographical location in the country. It is the intention of this present administration to ensure that every part of the country is linked with standard gauge railway lines.

“Whilst, the Federal Government will continue to rehabilitate and maintain the existing narrow gauge, other state and zones will be availed with the opportunity of railway modernization project within their geographical zone.

He called on the communities where the facilities are sited to make the best use of them by protecting the infrastructure from vandalisation.